FIRST PRINTED IN THE
MAY/JUNE 2022 ISSUE

The first part of the story you’re about to read may sound very familiar. Sadly. It’s all true.

Chicago mom Laura Danger was happily teaching at a special needs public school while her two children were in day care.

And then came the pandemic.

Her children, who were 9 months and 3 years, were exposed to COVID-19 back-to-back, their day care classes closing for a total of eight weeks. Like the rest of us, Danger and her partner — was also working full-time — continued paying for day care, but their children were home with them.

“We bought a corral and a million toys, and I put the baby in a mesh puppy pit in the basement behind me,” Danger says. “The 3-year-old would try to keep her busy, and I would mute the computer if they were screaming.”

It seemed unsustainable, but Danger was hopeful that the worst of COVID would pass by summer 2020. She kept her children out of day care that summer so they’d be healthy, though she continued to pay to keep their spots. Once fall came around, the kids returned to day care, and were sick immediately, so they switched to a nanny.

Danger taught from the basement, escaping to Target to use the bathroom so her children wouldn’t realize she was at home.

“I was the dungeon troll for the school year,” Danger says. But again, it wasn’t sustainable, and she fell into a mental health crisis. The following year, Danger was struggling with her mental health, one child started kindergarten, and the family realized they couldn’t afford to continue spending the money on a nanny for a single child. She dropped the nanny and put one child in kindergarten and one back in day care. Of course, her children got sick immediately and had to stay home until the PCR tests cleared.

“I was coming home every night, not sleeping, my stomach was tied into knots, I was snapping at my own children who were home sick, and I was almost out of sick days,” Danger says.

It was time. She wrote a resignation letter and officially left the workplace, joining the 64 million women who lost jobs in 2020 alone, accounting for 5% of the jobs held by women who were forced to choose between their children and their jobs.

Today, two years into the crisis, women don’t appear to be making any major leaps or bounds back into work. In fact, they’re still leaving. The January jobs report found that 275,000 women left the workforce in December 2021 alone, leaving the women’s workplace participation rate at just 57%. This is a rate that hadn’t been seen since 1988. While the number of women working or looking for work dropped from August to September, it rose for men.

The reasons aren’t surprising, says Chandra Sanders, the director of RISE, the nonprofit arm of The Mom Project, which addresses a lack of equity in the workforce.

“Mothers are often celebrated for being expert multitaskers — caregivers and team-playing coworkers, C-suite officers in their professional lives and their personal lives — and the pandemic put even more pressure on these already very demanding, multifaceted roles,” Sanders says.

Even though most schools have been re-opened for at least a year, there have been intermittent closings and many sick days, making it difficult for women to consider committing to a full-time position when they can’t predict the future of the virus.

Mothers returning to work require flexibility, which encompasses so much more than the ability to choose the location you work from, if that’s even an option, Sanders says.

“Embracing atypical schedules — hours that allow mothers to attend to their familial and professional needs — is key, as is ensuring that there’s a strong employee support structure consisting of access to mental health resources, child care resources and a culture of understanding,” she says.

There were 1 million fewer women in the labor force in February 2022 compared with early 2020, meaning they are neither working nor looking for work; men, on the other hand, have recouped all their pandemic labor losses, according to the National Women’s Law Center. Women now make up more than two in three, or 68%, of net job losers since the start of the crisis.

“For the millions of women who left the paid workforce at the start of the pandemic and haven’t yet returned, the two-year mark is significant,” says Sharmili Majmudar, the executive vice president of policy organizational Impact Women Employed in Chicago. “This is the point at which the gap in work history becomes much harder to overcome.” 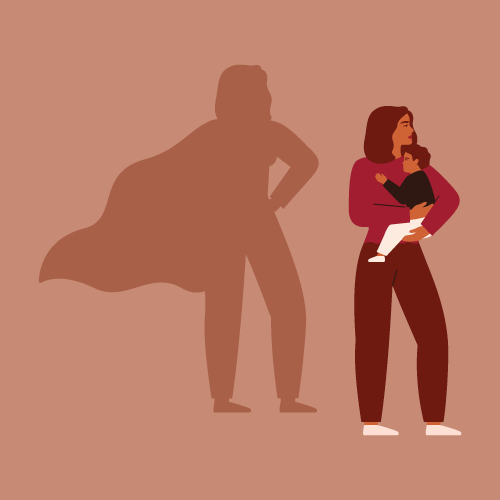 “Women didn’t leave the workforce to relax somewhere,” she says. “They were simultaneously managing ill friends and family, kids attending Zoom school, drive-by birthday parties, wiping down groceries and constant fear about the health of their loved ones.”

Majmudar pointed to a study by ResumeGo, which found that as two years outside the paid workforce turn into three, the chances of getting an interview fall by 50%.

Women who want to return to work face multiple challenges, from the employers who have a bias against long gaps in work history, to the caregivers and household responsibilities that continue to be a gendered burden, Majmudar says.

According to a Pew Research Center study conducted at the end of January, roughly 59% of U.S. workers who said their jobs could mainly be done from home were working from their residences all or most of the time. And, of those, the majority were working from home by choice versus necessity — a flip from the start of the pandemic. Most of the respondents (64%) said their teleworking arrangement made it easier to balance personal and work life.

The women who appear to be having the best luck are those who are pivoting.

Nicole Rhone, 38, was living in a three-bedroom Hoffman Estates home with her 5-year-old and 17-year-old when the pandemic began. She was an HR manager and a business partner for a billion-dollar global organization — and she was also her father’s primary caregiver.

“Everything hit the fan,” Rhone says, explaining that she knew immediately that she’d have to give up her job. Her husband traveled too much to help with pandemic schooling, and she couldn’t take on all the roles.

So she moved her family to a two-bedroom Elgin home in April 2020, resigned from her job and became a full-time stay-at-home mother and caregiver.

“I think that it speaks to how many hats women really have to wear,” Rhone says. “We’re not only working in the workforce, but we’re responsible for the kids, for our parents, for handling all those other things. We really had to be forced to choose between work and our families, and it stinks.”

The pandemic exacerbated a problem that’s existed for a long time, says Tara Ceranic Salinas, professor of business ethics at the University of San Diego. Research shows that women still do the majority of the child care and domestic work at home, she says.

“In fact, working women spend 21 hours a week on household tasks and that does not include child care,” Salinas says. “So when schools and day cares closed, women often added managing Zoom school and entertaining kids to their already full days.”

The situation simply became so unmanageable that over one-third of mothers living with school-aged children left the workforce since the start of the pandemic. That’s not to say that men haven’t also exited the workforce for the same reasons, but women and their careers have borne the brunt of this pandemic in ways men simply have not, Salinas says.

“Women didn’t leave the workforce to relax somewhere,” she says. “They were simultaneously managing ill friends and family, kids attending Zoom school, drive-by birthday parties, wiping down groceries and constant fear about the health of their loved ones.”

Rather than returning to pre-pandemic days, Salinas says, she hopes companies spend the resources to do better for women. But before those companies do that, she suggests that women ask themselves: Do you want to do what you used to do? What have you learned about yourself and your skills in the last two years, and how can that apply to work? What kind of flexibility do you need, and how will this company support you?

This is exactly what Rhone did.

When her father passed away and her youngest returned to school, Rhone started trying to incorporate her HR past into her own business, founding her own company called Flourishing, which helps women create a work-life balance to avoid burnout.

Rhone still can’t work full-time, since she has to take her child to and from the bus, there’s limited before-and-after care, and she’s responsible for any of her children’s sick days. But she feels good to be working again.

A dad shares when he started believing his child and how it might work for you, too.
Read more

The former Chicago Bears and dad is focused on raising strong girls and changing Black health with Alkeme.
Read more

My Mantra: You Can Do Anything for One Minute