‘Working’ is great date night for mom and dad 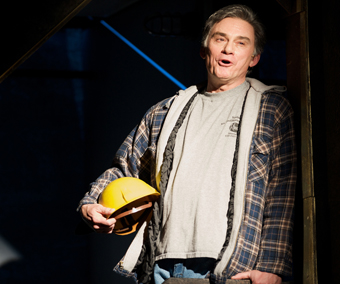 “Working,” the new version of an older musical, based on the 1974 book by Studs Terkel, is an entertaining, often moving show that has much to offer for parents – and even for kids, if you can tolerate a few f-words sprinkled in, plus one testimonial from a prostitute.

For more information, call the Broadway in Chicago Ticket Line
at (800) 775-2000 or visit BroadwayinChicago.com.

The musical has gone through several revisions and re-adaptations over the past 33 years, but this one feels thoroughly up to date. Computers, cell phones, outsourcing, downsizing, hedge funds and the current economic downturn are all referenced. So is the old master himself, Studs, whose voice makes an appearance at the beginning in a tape of one of his interviews, asking ordinary working people to talk about what they do and how they feel about it.

The show, which runs 100 minutes with no intermission, builds slowly at first but soon hits its stride. There is no plot, but one fascinating character after another takes center stage to talk and sing about their work experience. Six cast members, three men and three women, play a total of 26 workers, ranging from iron worker to fast food clerk, stone mason, truck driver, home care worker, factory worker, housewife, office workers, teacher, union organizer and the aforementioned “working girl.” The profiles are based on Terkel’s interviews from the original book.

Covering a wide employment range, the overall effect is therapeutic, highlighting the dignity of work – or at any rate the dignity of all those who work. As one character puts it, “Jobs aren’t big enough for people.”

I suspect this material would lead to some pretty fascinating “what I want to be when I grow up” discussions with tweens or teens (at least one tween was spotted in the audience). Hopes and dreams are frequently referenced. And more than one vignette focuses on the connection between work and family. The iron worker who starts things off comes back in the end to sing, “My kid is my imprint. This is why I work. … I want my son to tell me he’s not going to be like me.” The housewife’s song is particularly poignant.

Though there are no recognizable hits, the songs are engaging, often funny and well performed. Highlights included the two composed by pop star James Taylor (“Brother Trucker” and “Millwork”), one of an ensemble of songwriters who contributed. The main creative force behind the show, however, was Stephen Schwarz, responsible for such musicals as “Godspell” and “Pippin” and the music for Disney’s animated film, “Pocahontas.”

The subject matter couldn’t be timelier, given the attention to unions lately in the media as well as the continuing high unemployment rate. This is a show well worth seeing.

Happily, it’s also quite convenient, with a parking garage that puts you directly in front of the theater entrance. With a validated ticket, it only costs $11 to park.

Chicago Parent Staff -
Here are some ideas to celebrate the Festival of Lights.
Read more
At Home