Why stop at slides? Some Chicago parks are an artistic playground 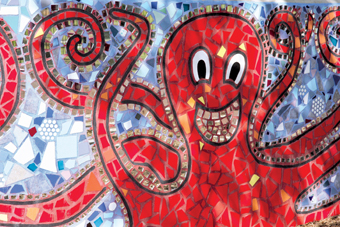 The Chicago Park District operates more than 500 playgrounds in the city, the vast majority of which have slides, swings and climbing structures. But a handful have something more: delightful and whimsical play structures envisioned by the community and created by artists.

Margate Park, 4921 N. Marine Drive.
Artists Corinne Peterson and Ginny Sykes will talk about the metal
sculptures of a dragonfly and a butterfly as well as limestone
animal sculptures and mosaics.

Roscoe Playlot at Belmont Harbor, 3600 N.
Recreation Drive.
Artist Jon Pounds will talk about the concrete boats that appear
to be floating in rolling waves of soft surface.

Palmer Square Playlot, 3100 W. Palmer
Blvd.
Artist Roman Villarreal will talk about the play structures based
on the story of “The Velveteen Rabbit.”

Since 2005, the Chicago Public Art Group, an independent nonprofit, has created public art that acts as play structures in seven Chicago playgrounds. An eighth, planned for the new Albany Whipple Park at 1803 N. Albany Ave., will open later this year and features a giant spider and spider web climbing structure.

“In each case, we try to work with what the community is interested in and then we try to make a good artistic response to it,” says Jon Pounds, executive director of the Chicago Public Art Group.

For example, residents around Skinner Park, 1331 W. Monroe St., wanted a climbing structure in the form of an animal. Then they told the artists they wanted to plant a community garden once the playground was finished.

These unique parks only happen if the community demands it-and is willing to raise the additional money it requires. In one case, residents raised $400,000 to supplement the Park District budget for renovating a park, says Chris Gent, deputy director of planning and development for the Park District.

The average cost of a standard playground renovation is about $400,000, Gent says. That money buys new swings, slides and traditional play equipment as well as paying to make the parks safer and more accessible to people with disabilities.

Sarah Laing brings her kids, Julian, 5, and Anna, 3, to play at Margate and Roscoe parks. At Margate, 4921 N. Marine Drive, the art elements are more geared toward adults. Laing likes to sit on the artist-created bench and watch her kids play on the nearby firetruck-shaped play equipment. At Roscoe Playlot, next to Belmont Harbor at 3400 N. Lake Shore Drive, artists created boats and gentle waves that are aimed directly at younger kids.

“They just go to town climbing on these boats and making up stories,” she says. “I think it’s really great to have unique types of parks. I have a memory of going to a park when I was young and climbing on a huge rocket ship. Those are the memories that stay in their minds forever. I think my kids will always remember the boats (at Roscoe) and the firetruck (at Margate).”

Chicago will celebrate the artists and the park structures they have created in October.