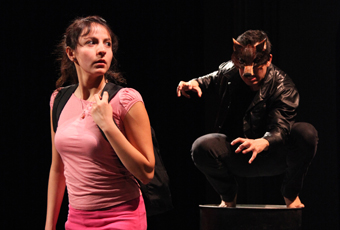 Tom Arvetis, director of Adventure Stage Chicago, noticed something odd a few years ago. Although the theater company was located in the Northwestern University Settlement House in the West Town area, most of the audience at their shows came from outside the area.

“Northwestern Settlement House is a social service agency that services the West Town neighborhood. The folks who come here to receive services are our neighbors, and our neighbors were not coming to see our shows,”Arvetis says. “We had to question why that’s been true, whether it’s a cultural barrier or a language barrier.”

What came next was a series of discussions with other staff members at the Settlement House, and eventually more discussions and activity days with the families who use the Settlement’s social services. Arvetis also reached out to Carlos Murillo, an internationally produced Latino playwright and director who also is head of playwriting at DePaul University.

“I was open about our desire to reach out to our Latino neighbors, and bringing someone into the room who speaks Spanish certainly opens up the possibilities,” Arvetis says.

The result of these efforts is “Augusta and Noble,” an original story about a girl named Gabi who has lived her whole life in the vibrant Latino community in the West Town neighborhood. When Gabi starts high school across the city at Northside College Prep, she is exposed to new people and possibilities and begins asking questions about her heritage, her parents’ journey to America, and exactly where in this world she belongs.

“The character in the play is the daughter of immigrants and is working very hard to make the best of her situation, but they’re certainly an under-resourced family. They don’t have a lot of things,” Arvetis says. “This has nothing to do with lack of effort or desire, it really has more to do with the challenges we all face to make our lives work, when parents are working two jobs and kids are expected to take care of siblings.”

The play deals with complicated issues, Arvetis acknowledges, but at its heart it is “very much the story of a girl who is trying to understand what the future holds for her and she can only begin to understand that by understanding where she comes from.”

The play is primarily in English, with some Spanish used as well. It is recommended for families with kids 9 and older.

Most parents don’t know that any school can call itself Montessori. We talked with one of just two AMI Recognized Montessori schools in Chicago to learn why this accreditation matters.
Read more
Sponsored Content