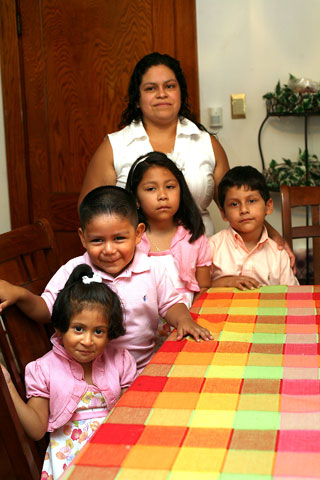 Gisela Alcantar and her husband don’t tell their four young children about the six months of mortgage payments they can’t pay.

“We have tried not to let them get involved, for their own sake,” Alcantar says as she laid out her plight in an interview amid the avocado and salmon walls of her local Neighborhood Counseling Services office, which helps homeowners negotiate with lenders to keep their homes.

“We’re still hoping we can come to some kind of agreement with the bank.”

But holding their tongues can’t completely insulate her flock from the silent forces of foreclosure. Their kids, ranging in age from 3 to 6, “definitely are aware of changes in the family,” she says.

For one thing, her kids see that mom and dad get into a lot more quarrels than they used to. And kids don’t have to be very old to wonder why mom says no to the little extras they used to plop into the grocery cart.

“When I tell them we can’t afford it, they ask me, ‘Why? Daddy’s working two jobs,'” Alcantar says. “I tell them it’s still not enough.”

Alcantar and her husband, in their 30s, moved from a North Side apartment three years ago to take advantage of lower home prices with a five-bedroom bungalow.

They were keen on the finished two-bedroom basement where her parents could live and help out with the mortgage payment. With three bedrooms upstairs, there was a room for the two girls and one for the two boys.

The loan the Alcantar family signed was not sub-prime. Everything was fine until Grandpa got sick and could no longer help with the payments. Then dad’s full-time restaurant job was cut to two days. He recently picked up a building maintenance gig, but the Alcantars are still falling behind.

If the family can’t keep the house, Alcantar thinks her parents may move in with a sister in Bolingbrook. She doesn’t know about the rest of the family.

Alcantar, who used to work as an accountant, pays the family bills. So she’s the one lying awake, adding and subtracting, dreaming up ways to borrow from Peter to pay Paul.

A tired, worried mom is a crabby mom, she admits.

“It reflects on the children, on the way I treat them,” she says. “I’m not as patient with them and the way I handle things.”