Two boys, one mother failed by the system 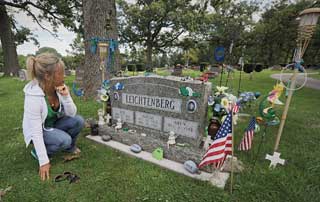 Amy Leichtenberg quietly approached the casino boat gamblers with fliers, hoping they may have seen her ex-husband, a known gambler. Three weeks earlier, he abducted the couple’s two young sons and by now all other leads had come up snake eyes.

Then her phone rang.

An investigator on the case told her to drive to the McLean County Sheriff’s Department to discuss something new in the case.

Leichtenberg excitedly made the two-hour drive to the police station, allowing herself to daydream about her two boys-9-year-old Duncan and 7-year-old Jack-happily greeting her there.

Inside the station, she didn’t see her boys waiting for her. Instead, Beth Kimmerling, the county coroner, introduced herself.

“No!” Leichtenberg screamed, quickly realizing her hopeful daydream turned into her worst nightmare. “No! No! No!”

The coroner couldn’t even get the words out, telling Leichtenberg that Duncan and Jack-the joys of her life-were dead. And her ex-husband was dead, too, taking his own life after killing both his sons.

10 tips to keep your child safe

The coroner told her the boys’ bodies were with their father’s body in the back of the police station.

“I want my boys as far away from him as possible!” Leichtenberg remembers yelling, punching a desk and nearby concrete walls.

As the coroner left, Leichtenberg dissolved into a chair, crying, screaming and shaking. She felt numb. She felt empty. She felt like joining her sons in heaven.

“I want to see my babies,” she remembers telling authorities.

No, they told her. Not yet. Not now. Not in their condition.

She begged them. They refused.

“I can’t let them sleep alone,” she told them. “Please let me sleep outside the door.”

Out of desperation, Leichtenberg took off her angel bracelets and pins that she had been wearing since her boys’ abduction. She asked Kimmerling to place them with her sons’ bodies.

“And please kiss them good night for me.”

Leichtenberg reported her sons missing to police on March 9 of this year, on a frigid Monday in LeRoy, a small town located 140 miles southwest of Chicago.

She feared the worst but hoped for the best when her two young sons didn’t return home after a weekend visit with their father.

Their father, Michael Connolly, never called to explain why.

Leichtenberg was convinced Connolly abducted his own children. She had four years of court records, transcripts and documents to prove her point.

“He didn’t love my sons. He simply used them as pawns,” says Leichtenberg, who moved to LeRoy after ending her marriage with Connolly in 2006.

Threats, arguments and legal orders littered the couple’s relationship, according to court documents dating back to 2005. Leichtenberg repeatedly, and unsuccessfully, battled Connolly in court from being allowed unsupervised visits with his sons.

In late 2008, he was allowed to keep his boys overnight without any supervision despite Leichtenberg’s repeated pleadings to court officials.

A court order of protection was issued against Connolly at one point, barring him from any contact with his ex-wife. He violated it over and again, forcing Leichtenberg to use the LeRoy Police Department as a pickup/drop-off point for custody of their sons, who were often caught in the crossfire.

“Don’t you want the boys to remember me?” Connolly asked Leichtenberg last December.

On several occasions leading up to the boys’ abduction on March 9, Connolly threatened to commit suicide if he wasn’t allowed to see the boys, court records state.

Three days earlier, at an East Peoria casino, Connolly confessed to a woman that he would kill himself if he didn’t hit the jackpot that night. He didn’t hit it. Instead, he abducted his sons and wagered their fate on his losses in life.

Michael Connolly, a 40-year-old unemployed pharmaceutical salesman, “was not a threat to himself or others,” according to a psychiatric report conducted during the couple’s legal battles.

Still, he had a lengthy record of verbal abuse and intimidating control with his family. In one petition for an emergency order of protection in 2005, a fearful Leichtenberg wrote, “He told me if I ever take his boys again he would hunt me down and kill me and my parents and cut us open.”

Leichtenberg, whose similar pleadings to a judge last December again fell on deaf ears, says her ex-husband was “a ticking time bomb.”

On March 9, the bomb exploded when Connolly abducted his sons. On March 29, the bomb’s fallout made national headlines when his sons’ bodies were located in the backseat of his 1991 Dodge Dynasty in rural Putnam County.

Connolly stabbed Jack in the back and gave Duncan a lethal dose of psychiatric medication, killing them both. Sixty yards away, Connolly hanged himself from a tree.

“He killed my babies,” says Leichtenberg, who had her sons’ last names changed from Connolly to Leichtenberg before their double funeral.

Earlier, Leichtenberg issued a statement blaming “a judicial system that failed me. I pray that the courts listen to the warnings from other parents like me.”

For the past year leading up to the killings, Leichtenberg says the courts didn’t listen to her warnings, her pleadings or her repeated mantra that “an order of protection is just a worthless piece of paper.”

A report issued weeks later by a peer review panel stated the deaths of Duncan and Jack could not have been predicted by the judicial, medical or law enforcement agencies. Leichtenberg strongly disagrees.

“I did everything I was supposed to do, by the book, and look what happened,” she says. “The courts ignored me and the system enabled (Connolly), letting my boys become sacrificial lambs.”

She now lives with the memory of sending off her boys that March day.

She visits her sons often at a local cemetery.

Their shared grave site at Oak Grove Cemetery is adorned with the boys’ favorite toys, angelic figurines, and a night light-with one plot reserved for only their mother.

Etched into stone at the bottom of the tombstone is the same line she often told them at bedtime: “Mama loves you to the heavens and back.”

From victim to advocate

Amy Leichtenberg has been thrust into the new role of advocate against parental abduction and domestic abuse, while championing custodial parents’ rights in the legal system.

“I can’t let my sons’ deaths be totally in vain,” says Leichtenberg, whose goal is to change existing laws. “I want to establish the Duncan and Jack Law to avoid this tragedy from happening to other children.”

The Duncan and Jack Law would take place in cases, such as Leichtenberg’s, when a court order of protection is in place and a child is not returned to the custodial parent. In these cases, an Amber Alert would be released immediately.

In Duncan and Jack’s case, an Amber Alert wasn’t released until 26 hours after they were reported missing, even though the boys were blanketed under an order of protection. Amber Alert criteria includes that a child is presumed to be in danger and, Leichtenberg contends, a protection order should prove this point.

Her advice to parents who may be in her former situation: “Document everything and do what you have to do to keep your children safe, whatever it takes,” she says.

An enemy in the family

Most children are aware at a young age of “stranger danger.” And
most parents immediately imagine a shady stranger sneaking off with
a child at a public park or school playground when a missing child
is reported.

However, more children by far are abducted by their own parents
than by strangers, according to years of federal data and national
experts such as David Almeida, author of Abducted Dreams: Keeping
Your Child Safe, When the Other Parent is the Enemy.

“Abductions by strangers may get more media coverage, but
they’re not nearly as common as parental abductions,” says Almeida,
a Massachusetts-based private investigator. “And of those parental
abductions, men are much more likely to abduct their own children
than women.”

Such cases take place across the country, transcending
socioeconomic factors such as age, race or geography. In Illinois,
for example, the mother of a young boy abducted him in 2007 and he
was located in September-living in a specially built “secret room”
in his grandmother’s home.

The case, unusual but not rare, involved 7-year-old Ricky
Chekevdia, whose mother, Shannon Wilfong, was charged with felony
child abduction. The boy’s father, Mike Chekevdia, of downstate
Royalton, had won temporary custody of Ricky shortly before he was
abducted.

Similar to most child abduction cases, it came on the heels of a
contentious custody battle. Experts say the most important factor
after a possible abduction is how quickly the parent responds.

“Unlike other abductions, you know who has your child, you just
don’t know where,” Almeida says. “The hesitation to contact the
authorities can be a huge mistake leading to weeks or months of
searching before the child is recovered.”

Statistics show the first three hours after a child’s abduction
are most critical, according to the Office of Justice Programs.
This includes immediately contacting police.

“You need to become your child’s biggest advocate and take
decisive action. Nobody else is going to do it for you,” Almeida
says.

Preschoolers learn a new language quickly in a bilingual immersion classroom. Learn how German International School Chicago makes this happen and why it matters.
Read more
You

From special museum exhibits to our favorite hiking spots, get ready to have the best Spring Break ever with these fun activities for kids.
Read more