Chicago dad to the toy industry: Stop toying with emotions 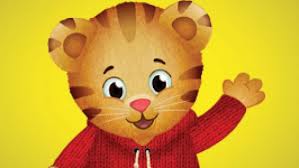 This week’s blog post is by WDP co-host Matt Rocco, who lives in the Edgewater Glen neighborhood of Chicago with Professor Foster (his non-white, non-dad wife), their daughter Viva, her toys, and her toys’ many emotions.

I didn’t sleep well last night. It wasn’t for the usual reasons you might expect from the father of a toddler. I wasn’t changing the sheets in a wet crib, or cradling the victim of a bad dream, or tending to a little fever. I spent the night turning the house upside down because a 2-inch-high action figure of Daniel Tiger had wandered away from his friends.

Miss Elaina, Prince Wednesday, O the Owl, and Katerina Kittycat were all safely tucked into a mixing bowl, snuggling one another just feet from talking versions of the Mickey Mouse Clubhouse Gang, figurines of the denizens of Sesame Street, plush companions to Doc McStuffins, a handful of Cabbage Patch Kids both vintage and new, and roughly one million other toy people and animals.

But WHERE WAS DANIEL TIGER?!!!

Left to my own devices, I wouldn’t have given Daniel’s fate much thought. He’d turn up, likely in the refrigerator of the play kitchen, in the hayloft of a Little People barn, or perhaps stuffed in the toe of Daddy’s boot. But when is a parent ever left to their own devices? I had a screaming 2-year-old terrified that Daniel was lost, alone, and scared. The fact that he was inanimate was lost on this child.

Now, I don’t blame her delusions on her age, her intelligence or an overactive sense of empathy. I blame it on the children’s entertainment industry, and Disney especially. There’s rarely a day that goes by in which I don’t see some kind of story about a plucky anthropomorphized object, heartbroken by rejection and/or on a brave journey to return to its owner.

Think of the many stories that fit the trope of “toy trying to get home,” “toy come to life,” or “toy protecting its owner”: The Velveteen Rabbit. Pinocchio. Raggedy Ann, Winnie the Pooh, The Indian in the Cupboard, The Nutcracker.

And worst of all, the Toy Story franchise and almost every episode of Doc McStuffins.

Of course my child was screaming for Daniel Tiger to be found. She’s only 2 and she’s already being inundated with the notion that, when no one is around, toys come to life, commiserate with one another, and have existential crises about no longer being loved, often to heart-wrenching songs performed by Sarah McLachlan (Queen of Sadness). I’m a little old to be deeply emotionally attached to the Toy Story movies – I was already in college when the first one premiered – but when the third one came out, I watched my college students completely fall apart at the notion that Andy (not a real person) would give his toy cowboy (not even a real toy cowboy) away (to another fake person). “The thing that makes Woody special,” said Andy in the final reel, “is he’ll never give up on you … ever. He’ll be there for you, no matter what.” Meaning, your toys will never give up on you, so NEVER GIVE UP ON YOUR TOYS… MAKE YOUR DAD SEARCH FOR THEM ALL DAMN NIGHT.

I know that the relationship between toy and child in Toy Story is meant to be a story about friendship, but in the movie itself, it isn’t a metaphor – the toy will literally never give up on you, and if you give up on the toy, or give it away to a day care center, it goes insane and turns evil, like that fuchsia bear villain.

My daughter hasn’t seen the Toy Story movies yet – that spider thing with the doll head is too scary for me, I can’t imagine what it would do to her – but she does watch Doc McStuffins on the Disney channel. One recent episode had a cuddly stuffed bunny distraught over the fact that she’d been put in a garage sale.

“I can’t believe [your owner] Alma would put you in a yard sale,” said Doc to the bunny, “she always loved you so much.” Don’t put your toys in a rummage sale, the episode tells my child, you will break their hearts. No matter how many toys you have, or how much you’ve outgrown them, never get rid of them, ever. Keep them all forever in cushy toy beds until every square inch of your parents’ house is choked with dolls. Hoard toy friends. Pamper them. Protect them. Oh, and never move out.

It’s no wonder Americans are have the most stuff, the largest carbon footprints and probably the least amount of self-awareness of anyone on earth. Who can worry about melting ice caps or drone strikes when somewhere a plastic baby might not being lying comfortably?

So, please, Disney, and everyone writing books and making shows for kids, give a Dad a break, and ease up on the psychic baggage you’re piling onto the little ones. Don’t create that nagging doubt in my child’s mind that while she’s sleeping, Daniel Tiger is huddled cold and alone in an alley after having been accidentally thrown out, crying a tiny glycerin tear and feeling betrayed.

I’ve got enough to worry about… and I need some sleep.

UPDATE: Daniel Tiger was found in an oven mitt hanging from a kitchen cupboard handle. He is currently in therapy for his abandonment issues.

You can also listen at whitedadproblems.com. (Do note that the show has a potty mouth and is definitely for Over 17 Only.) And follow the Dads on Facebook and on Twitter @whitedadprobs.

Brought to you by Star Cinema Grill
Read more
Health