This week I am lightening up the conversation so I can talk about something I rarely get to experience – television. Being a parent to three little girls doesn’t leave a lot of spare time for watching shows of my choice (watching The Piglet Movie for the 3

time last night was definitely not my choice).

But TiVo has made it possible for me to watch what I want, when I have the time. No more channel flipping or tuning into bad television just because it’s the “only thing on”.

I am a little boring, not very adventurous with television, but there are a few shows (and characters) that I have fallen in love with. Sometimes it’s drama and sometimes it’s humor (or a mixture of both), but either way, this busy mom enjoys and appreciates the stolen moments of escapism.

I can easily say that LOST was the best television drama that I ever experienced. The very last episode aired a few weeks ago and I miss the show already – the mystery, the relationships, the podcasts, and Claire’s crazy hair. But it had to end at some point, and to me, the finale was satisfying, deeply spiritual and beautiful. And these two guys pulled it all together…..

John Locke (Terry O’Quinn) – I felt a connection to John immediately, a self-proclaimed man of faith who knew there was a higher purpose and greater meaning to life. Like the rest of the characters, John was a flawed man, but the island offered him the opportunity to be whole again, to become a leader and to be considered “special”.

After death John was embodied by MIB (otherwise known as the Man in Black), an interesting character in his own right, but as both Jack and Ben pointed out, he dishonored the face he wore. John may not have been the final candidate, but he taught the others to have faith and optimism, no matter what the circumstances.

Jack Shepard (Matthew Fox) – Jack is a typical hero, doing his typical hero things throughout the first several seasons. His need to fix everything and his inability to “go deep” was not only a burden for him, it drove me crazy, too.

But Season 6 showed us a new Jack, a Jack who “woke up” and was committed to healing and finding his own path. In the end Jack came full circle and found peace. Not by fixing everybody else, but by realizing and fully embracing who he was. The last five minutes of the finale was some of the greatest television I have ever experienced. Matthew Fox deserves an Emmy, or at the very least a nomination, for his performance.

This show went off the air way to soon…..they were just getting started! It was fast-paced, ridiculously funny, sometimes crass, and every character stole the show (not to mention all of the great guest appearances…..especially Carl Weathers and his “stew”).

There’s been some talk that Arrested Development, The Movie is coming out in 2011 and you can find all three seasons of the show on DVD (and cable channel G4). If you’ve never seen it and you decide to give it a try, pay special attention to these guys…

Gob Bluth (Will Arnett) – Gob (stands for George Oscar Bluth, pronounced Jōb) is the oldest son and professional magician who never received love and respect and therefore has no idea what it looks like.

He drives a Segway (that says GOB on the front), he makes records with his puppet Franklin, and if anyone doesn’t follow through on a dare he breaks into what he thinks is a chicken dance (ca-ca-ca-ca-ca-ca-caw!). I can’t listen to his theme song, The Final Countdown, without smiling.

Michael Bluth (Jason Bateman) – Michael is supposed to be the straight man, the smart character on the show, but in reality he is just as crazy as everyone else. He has a wonderfully dry sense of humor and a strong love for his son (but not his son’s girlfriend Anne, who he tends to call “Egg”).

The show was basically built around Michael and his reluctance to become head of this nutty family, and his best scenes are with Gob (I have no idea how they filmed this show without constantly cracking up). Michael may be the most functional in the family, but that’s not saying much.

Are you wondering who still watches Friends on WGN and TBS? Well, me. At least four episodes are tivoed a day, and though I rarely even get through one, I take comfort in knowing they are there if I need them.

The show debuted my first year out of college while I was living in Chicago with my friends, and like the characters on the show, I was figuring out my career, dating, and trying to find myself.

And then we grew up together. Todd and I got married around the same time as Chandler and Monica, I was pregnant with Jacey when Rachel was pregnant, and I moved out to the suburbs around the time the show ended.

In the last season of the show, Todd and I flew out to L.A. and watched the taping of Phoebe’s wedding episode – a momentous occasion in my life (thank you Brian Donlinger!).

I always claimed to love them equally, but awhile back I was waking up from anesthesia and my husband took the opportunity to ask who my real favorites were – this is what I said, and since I was under the influence, it must be true.

Chandler Bing (Matthew Perry) – Hands down the best feature in a male is a great sense of humor (#1 reason why I married my husband), so it’s no wonder that I love Chandler. He was originally self-depreciating, sarcastic, and stuck in “Janice” limbo, but in the end he became a husband, a successful advertising exec, and a father to twins (he finally went through the metaphorical tunnel!).

“Fat” Monica (Courtney Cox-Arquette) – Monica was funny, but “fat” Monica was so much better. She and her “flower” were only in a handful of episodes, but she was emotionally healthier than real Monica – more confident, kinder, and a lighter spirit.

This is one of the best sitcoms in years because it’s consistent, warm and not at all cynical. There are always lessons to be learned and this family really loves each other. Every character is good, but these guys are my favorites. 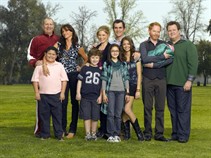 Cameron (Eric Stonestreet) – Cameron is Mitchell’s partner and Lily’s dad, and he is committed to following his dreams (he sings at a friend’s wedding, he plays drums in Dylan’s band, and he dresses up like a clown for parties).

He loves being a stay-at-home dad, and he’s a fierce protector of his family. Most notably when he grabs a bat in the middle of the night and says, “It’s go time” as he heads to confront the “man” in Lily’s room (turns out to be the next-door neighbor picked up on the baby monitor).

Phil (Ty Burrell) – Phil is the heart of the show, a true family man, but also a caricature of so many suburban dads, guys who have no idea that they are no longer cool.

He tries to befriend his daughter’s boyfriend (he calls him D-Money), and he’s a gadget and technology geek. When he doesn’t get his I-Pad on its release date he is devastated and goes numb (“Its OK honey, I don’t feel things anymore….”).

The Daily Show with Jon Stewart

In an effort to not get depressed, I stay away from the nightly news, but I do tune into Jon Stewart most nights. The reality of the world is either going to make us laugh or cry, and I choose to laugh along with Jon and the correspondents.

He calls out politicians (he leans left, but he will be the first to rip into Obama) and points out the idiocy and the inconsistency of our national media.

Yes, this is satire, and although Jon and his staff claim to be entertainers, they are also incredibly smart and most of the time they are right on. It may be comedy, but I think it’s brilliant.

30 Rock – Alec Baldwin at his best; love Liz Lemon and her “Dealbreakers”

Oprah – I skip the fashion, the decorating, and the murderers, but otherwise, Oprah helps me live my best life.

The Bachelor/Bachelorette – Cheesy, overdramatic and overproduced, but everybody knows it (including Chris Harrison), so let’s just enjoy. I haven’t caught every season, but when I’m in, I’m IN (yikes Casey, go Roberto!).

SNL – It’s hit or miss, but Weekend Update is usually consistent….. click here to see two of my favorites, Garth and Kat.

Agree or disagree? Feel free to share your favorites.