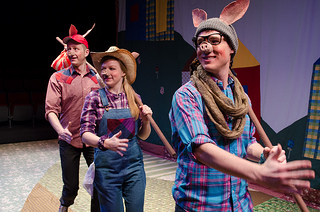 The classic Three Little Pigs gets a fun, jazzy, musical reenactment when Emerald City brings it to the Apollo Theater stage.

During its American premiere Saturday morning, small children giggled and cheered for the pigs as they worked together to build their homes before the hipster wolf could get to them. The one thing few of them did (with the exception of my two admittedly wimpy children)? Cry.

Yes. Wolves are scary, and to bring them front and center to a children’s show is a brave task. But this was done so well that even the most timid of audience members will be drawn into the wolf’s sly musical numbers – so much so, that they may even forget to be scared.

The original musical, directed by Ernie Nolan, starts with the mama pig, played by Rachel Pallante, explaining to her three piglets (Cameron Benoit, Micah Kronlokken and Mary-Margaret Roberts) – that it’s time to move away from their pigsty. They’d each have to build their own home.

With a clever discussion about the pros and cons and environmental effects of hay, sticks and bricks, the pigs get to work.

And then – SPOILER ALERT – the wolf arrives.

This is where the show – had it not already been good — gets really, really good. This production has really catchy, original songs. It has a strong plot, good actors and it sticks to the age-appropriate plot without going off on tangents.

But the wolf, belted out by James Nedrud, takes The Three Little Pigs to a whole new level. Nedrud could have made the wolf into a traditional scary, bad-guy character. Instead, he became the Elvis of the wolves. He’s a fun, mysterious, slightly flirty, jazzy twist of the bad guy. And when he was rocking out to his first song about how he was simply misunderstood, my 5-year-old whispered, “I don’t think so. I think he’s simply trying to fool us.” And he was.

Nedrud makes the audience love him – a wolf – so much, that we’re slightly disappointed when he falls into the pot of boiling stew at the end.

It’s a play that very subtly teaches about the construction of homes, about teamwork and about sharing – and it does it all through music.

The show is 45 minutes without an intermission, which is just enough to keep even the smallest audience members captivated.

A limited number of tickets will be available for $10 for each performance. The rest will start at $16 for children and adults. The show runs until May 17. 2540 N Lincoln Ave., Emeraldcitytheatre.com