The Memetis: Grip on the good life slipping away 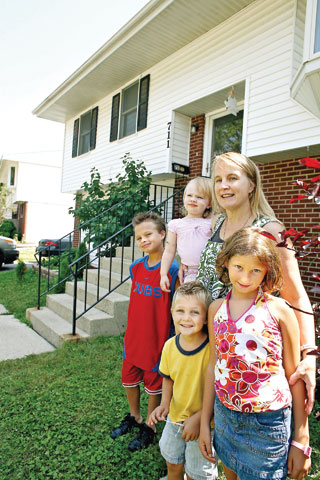 It isn’t easy to get an appointment with Dora Dulinski.

A foreclosure consultant with the Community Service Council of Will County, Dulinski is personally haggling with banks to keep 300 Romeoville-area families in their homes.

Latecia Memeti is one of them.

Memeti, a cottage manager at a facility for displaced children in LaGrange, has seen first-hand what losing a home does to kids.

“One minute they’re with their parents and the next minute they’re here,” she says. “They’re so sad, so lost. I couldn’t bear to think of something like that happening to my kids.”

Memeti and her two children, Alit, 9, and Alisa, 17, lived in three-room quarters at the facility when she first started working there. When they moved to a four-bedroom split-level in Romeoville, they believed they were getting the piece of the good life they’d always dreamed about.

They bought the house in the spring of 2006 on an adjustable rate mortgage. The ,700 monthly payment seemed “do-able,” she says, for her and her husband, Ruzhdi, who owns a janitorial business.

“We were first-time homeowners. We had no knowledge beyond what the real estate investor told us,” she says.

Money problems began to mount last summer when checks from a man she did day care for began bouncing. Check bouncing is contagious and pretty soon the couple was bouncing checks all over the western suburbs too.

Then the monthly house payment bumped up to ,000. Their credit, which they had been using liberally, was shot. “At the same time, we were using credit cards like crazy to try to keep up,” she says.

In January, when the mortgage ballooned to ,600 a month, Latecia and Ruzhdi could see their house of cards was about to topple.

“It seemed tragic to us to tell the kids, ‘We can have all this,’ and then take it away,” Latecia Memeti says.

That’s when she went to see Dulinski. “We’re just trying to concentrate on keeping our heads on our own pillow at night,” Memeti remembers telling her kids.

Which they did. The Memetis’ is a foreclosure story with a happy ending. They reached a settlement with their bank that lowered their interest and put their payments at about ,500 per month. The family is filing bankruptcy under the weight of all the credit card debt.

Through the ordeal, Memeti thinks her kids have learned something about the changing nature of material things.

“I want other people to know there is help out there and to go and find it,” she says. “That is the important thing.”