The challenges of being an older mom 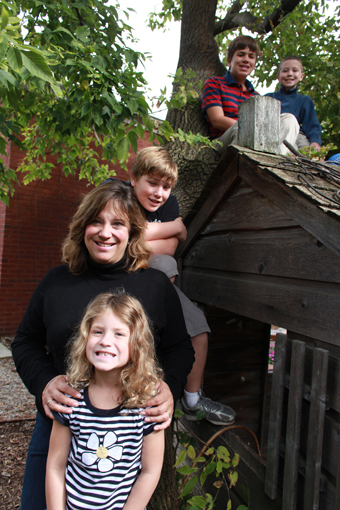 The ritual of Kindergarten Parent Night: A room full of fresh-faced moms and dads, peppering the teacher with questions about snacks and flash cards as they carefully inspect every square inch of the room where their precious baby will begin his or her formal education.

Tips from the pros

Peggy Lunak and Laura Daly spend every day teaching
kindergarten at Stony Creek School in Alsip, and they’ve had plenty
of caboose babies come through their classrooms. With more than
four decades of teaching experience between them, they have a few
words of wisdom for parents who want to stay as engaged in their
last child’s education as they were in their first
child’s:

But if you look a little closer at any given group of kindergarten parents, you are guaranteed to find at least one mom hovering near the back, half-listening to the presentation while she furiously composes a grocery list, texts her teenage daughter and tries to conceal the gray hair and laugh lines that tell the world she’s a decade or so removed from the majority of parents in the room.

Whether you call this last one your “caboose baby,” “bonus baby” or-as several of my friends refer to their third or fourth (or fifth) child-your “oops baby,” you’ve probably learned in the past few months that this school experience is just a little different. I certainly have as my final baby, Emily, gets settled into her kindergarten class, while my other kids are making their way through second, sixth and eighth grade.

Emily’s Friday folder? It usually gets emptied Sunday night instead of 3:30 Friday afternoon. School pictures? Let’s see what I can find the night before in that hand-me-down bag at the back of the closet. This began even before kindergarten when I had to program an Outlook calendar reminder for preschool show-and-tell.

This isn’t to say I value Emily’s school experience any less than the other kids’, but the cold, hard truth is being a parent of four kids at 41 is a whole lot different from having one in kindergarten and one in preschool at 33.

So what’s an “older” mom or dad to do to stay engaged?

Start by giving yourselves a break, says Joan Rice, co-author of What Kindergarten Teachers Know: Practical and Playful Ways for Parents to Help Children Listen, Learn and Cooperate at Home. She’s been a primary grade teacher for 20 years and has seen families of all shapes and sizes come through her class. She recalls one mom who made herself a nervous wreck about staying involved when she sent her 10th child to kindergarten.

“I had to say to her, ‘You need to lighten up on yourself a little bit.’ I can’t stress the importance of cutting yourself some slack,” she says. “It’s OK to say you just don’t have the energy anymore because your body is telling you that you don’t. I think it’s so much more important to realize the support and the energy you can give to your last child may need to come from a different source.”

At her Parent Night, she offers the option of “Happy Hands at Home,” which lets parents sign up for volunteer activities they can do at home instead of coming into the classroom. The kids love bringing home the folder of “homework” for their parents, and it makes moms and dads feel like they are contributing.

“It’s important for Mom and Dad to remember that Bobby will never know how involved they were in big brother Billy’s kindergarten,” she says. “With successive children, heavy involvement just isn’t a possibility for some parents, due to time, money and energy. It’s more important that they are there to listen to Bobby, ask him questions, work with him on kindergarten skills, and show him support and enthusiasm.”

She also encourages her seasoned parents to be a mentor to younger moms and dads who haven’t been through the school experience until now. Even though many moms are back to work at least part time when their youngest is in school, take a few minutes to introduce yourself to a first-timer and let her know you understand how anxious she’s feeling.

Of course, introducing yourself to a younger mom means getting over the fact that she’s, well, younger than you, which is not always easy.

I was reminded of this when I was chatting with a new friend and she mentioned “moms our age.”

“How old are you?” I asked. Her reply-29-made me cringe because no matter how you slice it, having a full decade between us means the phrase “our age” does not apply.

Lynn Petrak, a mom of four in La Grange, has been wrestling with those feelings since her youngest, Annie, started kindergarten this year with barely a look back and a wave.

“I did not expect how old I felt standing there with the other moms who were videotaping, photographing and holding on tightly to their first-born kids,” she says. “There was the difference in the First Day approach, yes, but there also were definite differences in the other moms and me. Like the skinny jeans. I am neither skinny nor the owner of skinny jeans.”

While it would seem logical that the older mom is the more confident one, Rice says it’s common for moms like Petrak to want to just run in, do what they need to do, and run out.

“They usually express feeling ‘out of touch’ with the early childhood classroom, so keeping their confidence boosted is really important,” she says.

While Rice encourages older parents not to overload themselves with guilt for not volunteering at every classroom party, she says it’s imperative they make an effort to facilitate play dates or other ways for their youngest to be with other kids the same age.

Even the busiest family should be able to accommodate ice cream and a trip to the park.

I’ll admit that’s a tough one for me. I work from home, so the last thing I want in my already loud and crowded house is another child. Then again, what fun is a new Barbie townhouse if Emily doesn’t have a friend to share it with?

So for now, I’m working on knowing when to make that extra effort (even if I lack time, energy and money) and when to stop worrying about whether I’m involved enough.

And for those times when I do give in to worry, I’ve got the advice of my older sister Kathy, who kept tabs much more on how her two older boys did in school than she did for her youngest daughter.

“By then, I trusted my parenting skills,” she says. “And I figured the other two turned out OK, so she would be fine, too.”

Jacqui Podzius Cook is a freelance writer who lives in Oak Lawn with her husband, four kids and two dogs.