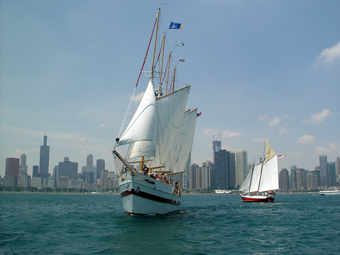 This month is the chance to see a sight hard to even imagine on the shores of Lake Michigan: 20 majestic tall ships from around the world parading toward Navy Pier and docking from Aug. 24-29.

In previous tall ship festivals, boats were scattered throughout the Chicago area; this will be the first time all the boats will be docked in one location.

The Tall Ship Parade begins at 4 p.m. Aug. 24, when the boats proceed along the shoreline from Northerly Island to Navy Pier. This process takes some time as the boats maneuver into position along the pier while Chicago Fire Department boats spray their hoses to welcome the big ships. Their arrival culminates that evening at 9 p.m. with fireworks.

Beginning Aug. 25-29, visitors can buy passes to get close-up looks and tours of the ships while they’re docked. “You get to see how they prepare their food, how they sleep, how they shower,” says Delores Robinson, spokesperson for Navy Pier. “It’s just a great, fun day to come to the pier and see how seamen live.”

The flotilla will include the Unicorn, the only all-female crewed tall ship in the world built with captured German U-boat parts salvaged from World War II, and the Bounty from the “Pirates of the Caribbean” movie. In addition to the ships, there also will be a festival in the pier’s Grand Ballroom with entertainment and a kids’ activity area. Fireworks take place each evening.

Viewing passes for the ships, which cost $15, $9 for kids 3-12, free kids 2 and under, allow visitors into the tall ship area. Boarding passes are $20, $15 kids and allow visitors to board boats and also include entry to the festival. Tickets can be purchased at navypier.com/tallshipschicago.

Plan ahead! We've rounded up some of the best activities and events to do with kids in Chicago and suburbs this month.
Read more
You