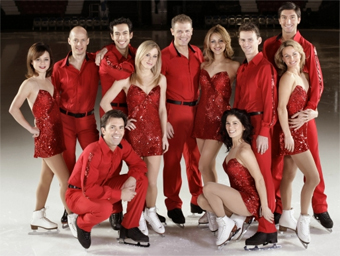 If you’re amazed by axels, stunned by spirals or flabbergasted by footwork, Stars on Ice is the show for you.

For 25 years, Smucker’s Stars on Ice has been bringing elite figure skaters to local arenas in a show highlighting the best of the sport. And on March 12, the show makes its annual stop in Chicago with a performance full of the familiar faces you’ve cheered on for years.

Win tickets to the March 12 show!

But before they come to town, Chicago Parent caught up with two of the performers in this year’s show to talk about skating, parenting and being on the road.

Three-time U.S. champion Michael Weiss lives in Virginia, where he is the busy dad to Annie Mae, 12, and Christopher, 11. He and his choreographer wife, Lisa, founded the Michael Weiss Foundation, which awards scholarships to promising young skaters. In 1999, the National Fatherhood Initiative named him Father of the Year, and in 2004, he received the Golden Dad Award.

You’ve won a couple of parenting awards. What does that mean to you?

Being a parent is the most important responsibility we can have in your lifetime. Every experience [your kids] have is based on the experience you give them. You don’t want to mess it up.

What’s the most challenging thing about being a dad?

How has being a skater affected the way you parent?

Skating is a huge part of my life, but when you have kids and their day-to-day activities, you realize the importance of figure skating: It’s not really that important. When it comes right down to it, the responsibility of raising children is way more of a responsibility than winning medals. Having kids really grounds you and keeps you from being too self-centered. In any individual sport it’s all “I, I, I.” Being a parent humbles you a lot more.

What’s it like being a dad on the road?

It’s very challenging. It’s something that my wife and I have grown accustomed to and learned to make work. It takes a lot of communication and a lot of teamwork. When I’m home, I’m very much involved in the kids’ activities. It’s like I work six months of the year – during spring and summer, I’m not doing much at all. I’m trying to stay involved in their everyday lives when I’m not actually there. That started even when the kids were really young. I’ve been traveling since they were born. I’d read them stories and put them to bed over the phone. It takes a lot of effort

Do you have any advice or caution for parents who want their kids to start figure skating?

Get them involved. Take them to the rink on public session and see if they enjoy it. As with any sport, the younger you get them involved, the better. They form a love and a passion for it on their own. You have to remember that kids have to have fun. Strike a balance between keeping it fun and working at it.

Stars on Ice comes to Chicago March 12. Why should families come?

The thing that Stars on Ice always brings is a great variety. There’s something for kids to enjoy and women to enjoy and the stuff I do – back flips and handstands – I usually do for the guys who come along with their girlfriends. I tend to do a lot of stuff that’s more trick-oriented and more athletic. At the end of Act One, there’s a big group number that involves all the skaters. It’s a nice diverse group of people. We all love skating, we all love performing. We have a passion for what we do. That comes through in the group number.

Ekaterina Goordeeva is best remembered as half of an Olympic Gold-medal winning pair with her husband Sergei Grinkov. After Sergei’s sudden death on the ice in 1995, she became a single mother. She’s now married to fellow Russian skater Ilia Kulik, and the pair live in California with daughters Daria, 18, and Elizaveta, 9. She continues to skate as a solo artist.

How has your life changed since being a competitive skater?

[Competition is] a totally different world. It’s you by yourself. You really focus on medals and competition; you give up so many different things in life. Now it’s a totally different life. Skating is more like work for me, just one thing in life. I put [my children’s] problems in front of my problems. Sometimes I get tired of it – I just have to give, give, give, and I need time for myself. I have those days too! [But] I’m very happy because my daughter says to me, “You’re the greatest mom ever.”

How has being a mom impacted your skating?

Not only for a skater, but for every woman, [being] a mom is so important and it fills you up so much with emotions and feelings that it would help you in whatever you do. You feel more confident and fulfilled and complete if you’re a mom.

You were a single mother for several years. How did you manage that?

My parents helped a lot because I was really busy, skating and touring a lot. They moved to the States for me, and I’m very blessed that I had parents who were able to stop working.

How did it work to form a blended family?

It was a little bit difficult. We ran through some difficulties because Ilia was young and then Daria became a teenager. It was difficult for him. He didn’t know what to expect or how to act. But, you know, that’s life. Now he has another one going to be a teenager soon! At least he had experience earlier so now he knows how to react somewhat.

What lessons do you want to pass on to your daughters?

It’s very important for any child, to study well in school and whatever you’re trying to do, try your best. I try always to tell my daughters not to be lazy. Since I’m an athlete and I’ve been working a lot, I’m always relying on myself to get a job done. Rely on yourself, don’t think that I will help you or your teacher will help you. Be responsible.

Stars on Ice comes to Chicago March 12. Why should families come?

I think it’s great for all ages. It’s a wonderful sport to do and it’s entertaining. You just sit down and relax and enjoy the performing. A lot of people watching skating on TV are really amazed when they get to live performance how different it is and how much better it is. You feel the music [and] the ice. It’s a different atmosphere there. It’s not like in front of TV. It’s such a better experience if you watch live.

Chicago Parent Staff -
Even the pickiest of eaters will love these spots in the city and suburbs.
Read more
Sponsored Content

Hillary Bird -
Want to teach your young child Spanish or English? Try these board books that they are sure to love.
Read more
Sponsored Content

Brought to you by Forest Preserves of Cook County
Read more