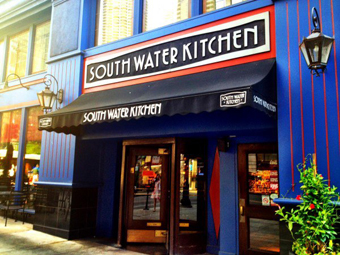 If you’re looking for a restaurant where you can eat like a grownup but won’t get dirty looks for bringing your kids, try South Water Kitchen. The restaurant is run by Chicago native and executive chef Roger Waysok.

All of the meat dishes are extraordinary, perhaps because Waysok gets as much of the meat as possible from local farmers and suppliers, such as Slagel Farms for pork and chicken and Dietzler Farms for beef. For those who prefer not to eat meat, try the seared scallops served with green pea and bacon hash and carrot ginger puree or the wild mushroom ravioli with asparagus, sundried tomato pesto and tarragon cream.

There is a kids’ menu, but look no farther than the baked mac and cheese (so good you’ll steal bites) and sweet potato gratin, both on the regular dinner menu. Children will feel all grown up with a cherry fizz to accompany their meal, made from cherry syrup and soda water, or the lavender soda with lavender syrup, blackberry preserve, lemon juice and soda.

Dessert also doesn’t disappoint. With my girls sipping on tall frothy glasses of chocolate milk, we opted for the ice cream served with sugar cookies, key lime pie (as good as we’ve ever had) and German chocolate cake accompanied with caramel, toasted pecans and coconut ice cream.