Giving back: A father’s journey to Cambodia 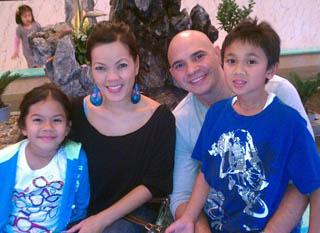 Anthony Sou left his family and sacrificed his livelihood to bring aid to the poorest of the poor in Cambodia, his homeland.

Sou, 38, of Hanover Park, hand-delivered bags of rice, soy sauce, mosquito nets, pillows and blankets to homeless, malnourished families living in the depressed country. He now is in the process of establishing a not-for-profit organization to provide aid to Cambodia’s poorest citizens and build schools in the country’s remote areas.

With wife Leny, son Kyle, 9, and daughter Kayla, 7, by his side, Sou recently spearheaded a fundraiser that collected $7,000 for the homeless and victims of natural disaster in Cambodia.

“Life is difficult in Cambodia,” says Sou. “In the U.S., there’s the opportunity to become who you want to be and the government will support you.”

Sou, a project manager, has lived in the Chicago area since 1985, but the visit to his homeland in April made him want to take action.

“The rich are rich and the poor are dirt poor,” says Sou about life in Cambodia. He saw families living in sheds and eating from trash bins.

The children have it the worst, he says. “In Cambodia, if you don’t have the money to attend school, there is no grant. You don’t go.”

Instead, children often work on farms to help feed their families.

Sou says he knows what it’s like to fight for your life in Cambodia. At the height of the Vietnam War, Sou, 5, became separated from his parents in the jungle and survived for three months by collecting rubber bands and trading them for food. A family acquaintance recognized him and reunited him with his parents, who made it to the border of Thailand and thought their son had died. Sou and his family (three of his eight siblings died during the war) stayed at a refugee camp and eventually landed in America because a Chicago family sponsored them.

“We don’t always realize how good we have it here,” Sou says. “Cambodians have been in Chicago for 30 years. Now I’m trying to get the younger generation to support our people at our homeland.”

Brought to you by Pilgrim Lutheran School
Read more
Attractions