How to have a worry-free slumber birthday party 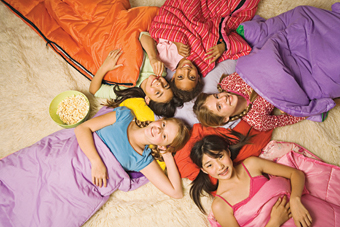 Whether your little one wants to host a few close friends or invite the whole class over for a slumber party, overnights have been a popular birthday party choice for decades.

Although they can be fun for many, they can be stressful for kids and parents alike if you’re not prepared for them.

Dr. Sarah Bauer, attending physician in developmental and behavioral pediatrics for Ann and Robert H. Lurie Children’s Hospital of Chicago, says some children are ready for sleepovers earlier than others.

“One child might be ready at 7 and another might not be,” Bauer says. “There’s really not a magic age. Part of it comes down to how the child is able to take care of themselves and what their expectations are.”

She suggests that a child know how to call their parents if necessary, be prepared for what will happen at the sleepover and be familiar with the hosting family and home.

“Going over to a cousin’s house is one thing, but spending the night at a friend’s house is something else,” she says. The parents also need to be comfortable enough with each other to exchange information and ideas.

Parents who are hosting the sleepover should be involved in planning and overseeing the party to help ensure its success, Bauer says.

“You need to think about group dynamics, and make sure people aren’t getting excluded or isolated unintentionally,” she says.

Eirene Heidelberger, president and CEO of GIT Mom and the mom of three boys, agrees that planning the party helps make it successful.

“The best advice I give and follow myself is to always prequalify your possible sleepover guest,” she says. “I ask the parent point blank if he is a good sleeper and (ask them to) be honest because I want to save both of us angst at 2 a.m. if he wants to go home.”

Chicago mom Vanessa Harrison, who has two girls 12 and 9, says getting the kids out of the house for a while as part of the party festivities is key. This could be going to a park, a pottery-painting shop or a movie.

Once they return and are fed, Harrison says she puts them on the lower level with their sleeping bags, pillows and stuffed animals and lets them talk until a pre-determined time.

“You need to set rules. Tell them you’ll check on them at 10:30, 11:30 and then lights out at midnight,” she says. “Then in the morning have an easy breakfast and have their parents pick them up early.”

If a child isn’t quite ready for an overnight, a “sleep under” is a great way to prep kids for an eventual overnight stay, Heidelberger says.

“All the guests arrive after 3 p.m. They come in their pjs, play games, have dinner, watch a movie and are picked up by 8 p.m.,” she says.

Hosting the right number of kids is also important to its success, Heidelberger says.

“In kid-land, they feel the more, the better. But the reality in mom-land is that just doesn’t work,” she says. “You have to be the bad cop and keep the guest count to two kids or three, max, because otherwise they rile each other up and your nerves will be on overload from the mess and loudness. It does not matter how large your home is. It’s not a hotel, and you’re not a concierge.”

During the party, Harrison suggests texting the other moms a photo of the kids in their jammies and sleeping bags. And remember that even though there will be giggling and screaming and some general upheaval, it will only last one night.

“Have a glass of wine and remember it will be over soon,” she says.