Sledding safety to remember during the winter in Chicago 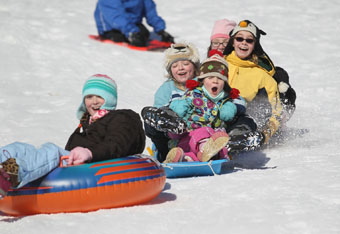 Winter wouldn’t be the same without zooming a sled down a snowy hill. But this favorite snowy-weather pastime could land kids in a heap of trouble. About 20,000 children under age 19 go to the emergency room each year with sledding-related injuries, more than 4 percent requiring hospitalization, according to recent data by the Center for Injury Research and Policy at Nationwide Children’s Hospital in Columbus, Ohio. Boys were more likely to be injured, accounting for nearly 60 percent of all injuries. More than 42 percent of the injuries involved children age 10 to 14.

Collisions produced 51 percent of the injuries. While the majority of injuries were fractures, cuts and bruises, collisions were more likely to result in traumatic brain injury. The majority of injuries, 34 percent, occurred to the head. The American Academy of Orthopaedic Surgeons recommends all participants wear helmets, sit in a forward-facing position and never slide headfirst down a slope.

To further reduce injury, sleds should be self-propelled. Children and young adults being pulled by motorized vehicles accounted for one-third of all injuries. Those under age 4 were more likely to be involved in accidents with vehicles.

“Given the potential for serious injury, children should never ride a sled that is being pulled by a motorized vehicle of any type including all-terrain vehicles, snowmobiles, cars, trucks, tractors, motorcycles, dirt bikes and lawn mowers,” says the study’s co-author, Lara McKenzie, Ph.D., the center’s principal investigator.

The Forest Preserve District of Cook County, which maintains 10 lighted and unlighted sledding and coasting hills, recommends children under age 12 wear a helmet and be supervised by an adult, and prohibits the use of inflatable tubes and metal-railed sleds.

Brought to you by Smart Love Preschool
Read more