It’s a baby boy for Shedd 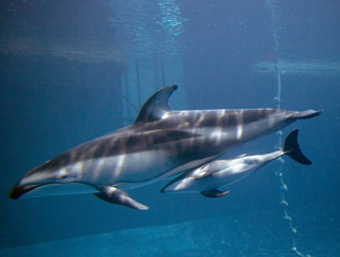 Shedd Aquarium’s new dolphin calf is growing, active and already passing important milestones. And after days of scrutiny, the marine mammal and animal health teams determined that the two-week-old Pacific white-sided dolphin is male, making him one of just three males of this species in North American aquariums and zoos.

The extreme minority of males in this species hasn’t made the cooperative breeding program easy, which is why Ken Ramirez, executive vice president of animal care and training at Shedd, says this calf is particularly exciting.

“This species is particularly important for us to study because it’s not found near the coast, which makes it difficult to study them in nature,” Ramirez says. “Studying them here means we can help make good decisions about things like fishing and boat traffic to secure their safety in the wild.”

Since his birth on Memorial Day, the calf has spent almost every swimming moment stuck to his mother Piquet’s side. He is the first baby for Piquet, 24. She was naturally inseminated at Miami Seaquarium by the calf’s father, Lii, after spending about year there. The team at Shedd says it is proud of Piquet’s natural mothering skills. “He’s almost entirely taken care of by Mom,” says Ramirez. “She’s much better at nursing than we are.”

However, just like any child growing up, he has begun to demonstrate more independence as the pair begins to spend a few moments apart during the day, marking a significant point in his successful growth.

Now estimated at about 30 pounds, the small, healthy boy whizzes quickly around Secluded Bay with mom close by. He’ll end up weighing between 250 and 275 pounds.

His name has not yet been determined. Ramirez says it’s all about studying the calf’s personality over time to choose a fitting name.

The calf will remain off exhibit for another few weeks as staff continues to monitor his health but Ramirez says they hope to put him on public view in July. Follow the baby’s development at the Shedd’s website, Facebook page or on Twitter.