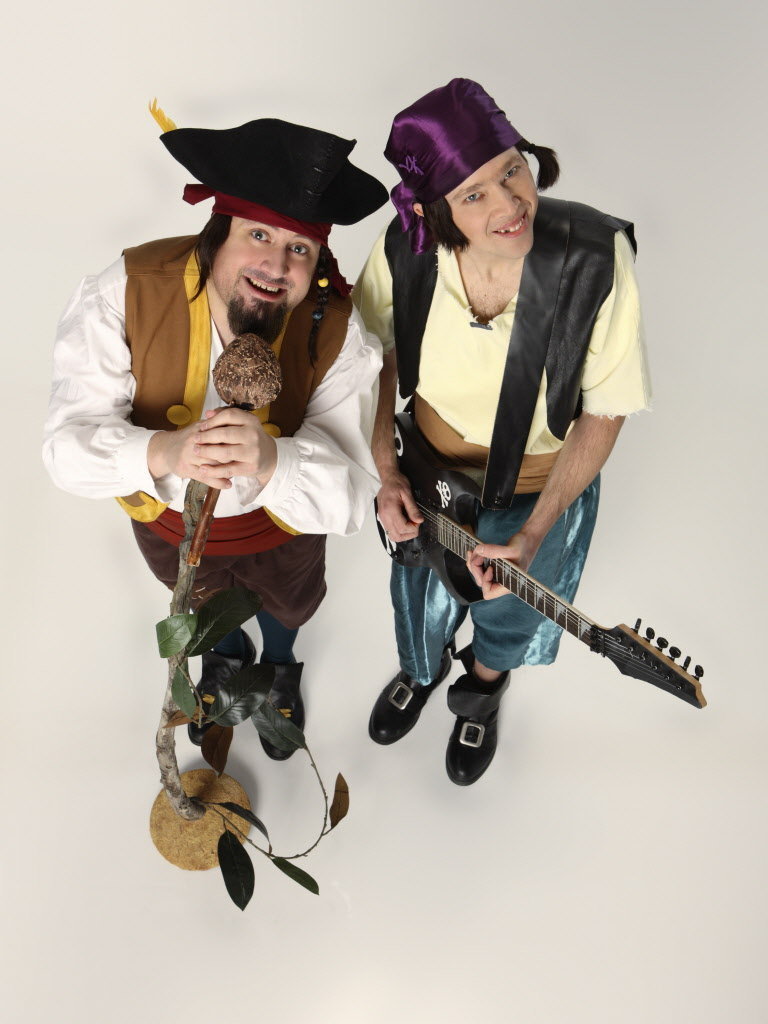 Portlanders, bandmembers and dads Kevin Hendrickson and Loren Hoskins, who have been channeling their piratey personas for just over a decade as Captain Bogg and Salty, got their Disney start thanks to a Google search for “pirate music” show creator Bob Gannaway performed while he wrote the pilot.

After Gannaway introduced the band to Jay Stutler, vice president of music at Disney Television Animation, the rest becomes an intriguing tale only Hendrickson and Hoskins can tell, which they did quite well when we sat down to talk all things pirate.

How did you go about getting involved with Disney?

Hendrickson: We’ve been long time fans ever since we were kids. Even ten years before we even talked to Disney we were thinking we wanted to create music in the style of the Disney records we had when we were little.

Disney influenced everything we had done, and then three years ago we got an email out of the blue from Jay Stutler, who wanted to talk to us about writing a theme song for Jake and the Never Land Pirates.

Hoskins: He told us that he found a video of us online and said to himself, ‘These guys are already doing what I hope the music for Jake and the Never Land Pirates will do.’

So he went to Jay and said, ‘We should add these guys to the theme song.’

But, Jay’s vision was to add more than a theme song if everything worked out and it’s continued to work out. It’s crazy the windfall of different opportunities.

Hendrickson: We’re looking forward to more opportunities for us to be live and in person. Like you say, that’s been our background, and it’s been amazing to work on the show, and we’ve been working on the show in the dark, quietly, secretly in the dark for a couple of years now, and now we can say, ‘Hey! We wrote the music for this show!’

Hoskins: For me, as a kid, I was really into the Disney Channel. That’s what we had in our house when it first came out, so when Treasure Island was on, I was completely riveted and then went to the library that weekend and checked out the book Treasure Island.

The book is very intense and full of real struggles and epic stuff for a kid, and I kept looking around thinking, ‘Is it ok that I’m reading this? Oh wait, ok, it’s in the kid’s section.’

From then on, I was hooked. And then watching the character of Long John Silver and listening to Disney albums and all that, it came to represent this adventure and song and the allure of finding treasure and failing and all these cool things that just take you out of being a shy little kid to someone that embraces adventure. And when you bring with it all the silly voices and costumes, it was perfect.

Did you know you’d be such an important part of the program itself?

Hendrickson: That was a surprise.

Hoskins: That was just one thing they surprised us with.

That to me, was huge. My whole lie I’ve always wanted to be in cartoons and all of a sudden Kevin and I are in a pirate cartoon.

Hendrickson: The definition of surreal.

You’re even immortalized in puppet form in the Disney Junior stage show.

Hoskins: In a way that’s more surreal. We went and met out puppets at Walt Disney World and they came flying out of a trap door and we were like, ‘Well, there they are!’

Hendrickson: That pretty much anchored it all.

Your performance gives the show a comedic, almost Shakespearean feel.

Hendrickson: That’s one of the things they said, that Sharky and Bones could act as a Greek chorus, so you’re picking up on what they’re laying down.

We just found out it’s the number one series for all boys ages 2-5 years old.

Hoskins: It’s mind blowing! We were just hoping people would like it.

Hendrickson: And we’re hard at work on the second season right now.

So how do you balance this newfound fame (again) with family life?

Hendrickson: So far, we’ve been able to work fairly regular hour days, so we haven’t been taken away from our families that much.

Hoskins: And believe it or not, when we’re not in our pirate costumes no one really recognizes us. We can stay fairly anonymous, which is cool.

We come out with our hats on and play the jolly pirates, then we take them off and go home to our families. It’s cool, and our families are super supportive and part of our team.

So what can we expect from you next?

Hendrickson: Well, there will definitely be new music and new songs for the second season.

Will there be an album?

Hoskins: I don’t know if I can say…

Hendrickson: Honestly, we don’t know much about what’s going to happen next.

Hoskins: Yes, we just sit in our little caves and make pirate songs.

But, I think it’s safe to assume that there will be a way to collect these songs.