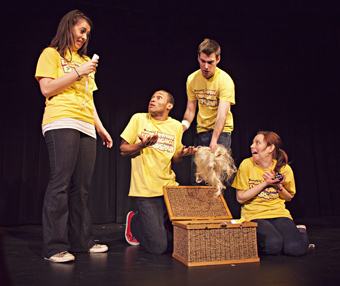 Music blares, lights flash, and servers circulate with trays of beverages and appetizers before the comedians take the stage.

Recommended for kids 5 and up
Noon Saturday

Sounds like your typical comedy club, with a few key differences: It’s 11 o’clock on a Saturday morning and the audience is made up primarily of the elementary school crowd.

After all, Improv Extravaganza Explosion! by Chicago’s famous Second City, is just for kids (although moms, dads and grandparents are welcome, too).

When the four actors take the stage, they launch an hour-long show that’s high-energy and hilarious-even for the adults in the audience.

The kids, especially boys in the fourth- and fifth-grade range, relish the chance to shout out suggestions, and a few lucky volunteers (and even one dad) take to the stage. Fortunately for quieter kids, no one is pulled up on stage who doesn’t raise their hand.

The show integrates skits and games with puppets, rapping, pop culture references, and even iPads. There are a few running jokes through the show, and use of some “typical” improv tools, like a bell and a blonde wig.

Fans of the now-defunct “Whose Line Is It Anyway?” might even recognize a few of the improv “games.”

Though a few jokes may go over some kids’ heads, there’s no need to worry the humor will be inappropriate.

“The actors know who they’re performing for,” says Diana Martinez, president of The Second City, Inc. “Improv can be done in any environment. You can keep it clean. … That doesn’t mean it’s dumbed down.”

In fact, Martinez says kids are an “underserved market” in comedy, and since Second City’s theater is empty during the day, it was the perfect opportunity to grow the audience. Besides the weekend shows, there are also midweek matinees for school groups.

“There’s something about improv and its fundamentals that really transcends all art forms,” she says. “It’s a creative educational tool.”

But more than that, it’s a big, loud hour of fun, wrapped in a comedy club package. At the end of the show, I couldn’t help but agree when I heard a little girl say with a giggle, “That was funny.”

Have a shot-wary kid? Here’s how to prepare them.
Read more
Education

Katina Beniaris -
Kids can get creative with these fun and free coloring pages for kids, which include friendly monsters, Disney characters and more.
Read more
Guides