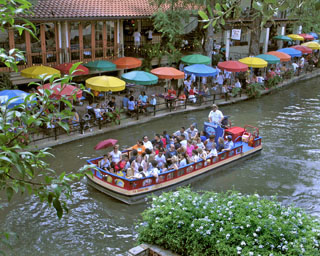 It’s important for families to “remember the Alamo” when they visit San Antonio, but the historic mission is just one thing worth seeing in this friendly Texas town. In addition to the famous River Walk, SeaWorld and the huge zoo, the Natural Bridge Caverns and neighboring Wildlife Ranch, as well as the San Antonio Children’s Museum, are worth putting on your agenda.

Parents may recall lessons about the siege of the Alamo-where
Texans successfully fought Mexican soldiers during the Texas
Revolution-from their school days, from the 1960 movie starring the
late John Wayne, or maybe the 2004 remake with Dennis Quaid, Billy
Bob Thornton and Jason Patric.

San Antonio also has four Spanish frontier missions situated
along the San Antonio River-San José, Concepcion, San Juan and
Espada. Not to be outdone, museums in the city include the
kid-appealing Ripley’s Believe It or Not, Texas Ranger and the
Plaza Wax museums.

And thrill seekers can enjoy hair-raising rides and some of the
best entertainment in the area at SeaWorld and Six Flags Fiesta
Texas.

The Wildlife Ranch& Safari is a drive-through. It’s fun driving slowly and stopping to look at or feed the animals. There are dangers, though. Do not under any circumstance put your hands out to feed them; throw the food on the ground. Save the getting up close with the animals for the small petting area by the parking lot.

Next to the ranch are the Natural Bridge Caverns, the deepest in Texas, they say. How deep you go depends on which tour you take. Don’t bring kids under 4, though. Touching anything is forbidden.

If you have little ones, stay above ground and head to the San Antonio Children’s Museum, right in the heart of downtown. It isn’t huge but packs in plenty of fun.

My kids kept going back to the ball zone. The 2-year-old and the 6-year-olds had endless fun putting the balls in the various “machines.” In the science room, the boys liked making and racing cars, while the toddler played in the baby playland.

While downtown, don’t miss a trip along the River Walk, either on foot or by boat. It is packed with restaurants to appeal to any taste and budget, making it a particularly good spot to spend lunch or dinner.