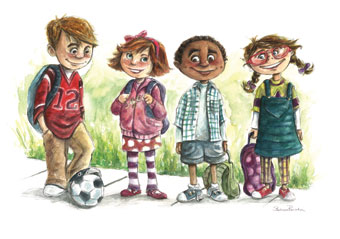 It may seem innocuous to have your baby on Aug. 31, but that date will loom large as soon as your child starts to walk and talk. With a Sept. 1 cut-off date for starting kindergarten at Chicago area schools, whether or not you should delay your child’s entry into kindergarten-commonly called academic redshirting-is an issue that troubles both parents and experts alike.

Chicago mom Amanda Doblin and her husband talked with friends, family and early-childhood educators before deciding to redshirt their son, Evan, 5. They even read Outliers by Malcom Gladwell to better understand the book’s famous study of Canadian hockey players who have later birthdays, and therefore were found to be the biggest, most skilled and most mature, compared to the younger players.

“By translating this study to education, we realized that by ‘redshirting’ (Evan), we were setting him up for a more successful educational experience,” Doblin says. “After our research, we felt validated on many levels in making our decision.”

The Doblins decided to let Evan have another year in pre-kindergarten.

“The Sept. 1 date is arbitrary and will make little difference in the future,” Doblin says. “Once he goes to college and enters the working world, Evan will be on an equal playing field competing for college entrance, job interviews and the like.”

Research on the topic tells another side of the story.

One review of the studies done on academic redshirting by Hermine H. Marshall for Young Children in 2003 suggested that any perceived advantage to redshirting in the kindergarten year all but disappears by the third grade.

Another influential paper on the topic, “Living the ‘Gift of Time’,” University of Wisconsin-Madison researchers liken academic redshirting to a game of “‘rock, paper, scissors’… where ‘one strategy does not guarantee a win.'”

Aimee Yermish, owner of the da Vinci Learning Center in Massachusetts, specializes in working with children who are bright-to-gifted, learning disabled, or a combination thereof. She calls the redshirting trend disturbing.

“The basic problem with ‘redshirting helps kids’ is that we cannot ever know what would have happened with any given kid if we’d made the opposite choice,” Yermish says.

Gifted boys, who are most likely to be redshirted because of perceived behavioral issues, are most at risk.

On the other side, many Chicago area educators see distinct advantages to academic redshirting.

Ruth Luke, director of the preschool at the First Presbyterian Church of Lake Forest, works with parents to adapt to the academic challenges of a late summer birthday.

“We can’t change the system, but we can help children have a better entry experience with redshirting,” Luke says. “Little boys take longer to cook. You give them another year and they are really where they should be.”

“We have to be totally flexible with children when they are within our boundaries,” Williams says. “I think there are exceptions and we need to have a process to take a second look and look beyond the law or policy and then work with the family.”

Karen Faust, a River Forest mom, did not encounter any debate about whether or not to hold her son Carl back a year for kindergarten.

“Carl was born Aug. 3, 2003, and he’s in first grade instead of second,” Faust says. “It really just seemed like the natural choice.”

Faust does not believe parents hold their children back to have them be a “super kid” or for them to excel, but because they want their children to have a more “normal kindergarten experience academically, socially and emotionally.”

Faust’s situation in the River Forest School District is unique.

Chicago Public Schools do not offer any leeway when it comes to deciding when a child should enter school. While kindergarten is not required in Illinois, a child must adhere to the Sept. 1 deadline for the school year.

After unsuccessfully applying for their late-summer born son to attend Chicago Public School kindergarten at age 6, Lisa Foran of Evanston finally gave up on her dream of raising children in the city.

“We applied to 18 public schools, and didn’t get into any for the 2010-11 school year,” Foran says. “We moved to Evanston this past June so our children could attend school and we as parents could be certain that our child/children wouldn’t be regarded as just a number.”

Parents who want alternative options for their late-summer born children must look elsewhere-like Foran, to suburban districts or to private schools-to adjust their child’s entry into kindergarten or first grade.

For example, North Park Elementary, an independent school on the city’s North Side, does not have a policy on redshirting, but will tell prospective parents to work with a child’s preschool and other experts to determine the best start date for that child to enter kindergarten.

Another prominent independent school in the city, Francis W. Parker, however, does not support the concept of redshirting.

Admissions Director Karen Fisher wrote in an email that its admission process is firm with a Sept. 1 and age 4 requirements for junior kindergarten.

“Our guidelines are well considered by our educators and have served children well over the years. There will always be a spectrum of birthdays in a class of children and it is not necessarily a disadvantage to be on one end or the other,” she wrote.

With CPS making one recommendation, and some suburban and private schools offering other options, the decision about how to handle a child born on the cusp of a school year can be daunting.

There’s no statistical proof that redshirting will actually help a child in the long run, but a parent’s intuition means something if they are willing to compromise on location or cost.

In that way, Doblin’s advice may end up being a good guidepost for parents.

“My husband and I made a choice that suits our family best,” she says. “Trust your instincts and the choice that you make.”

Whether you want to go back to work, go part-time or want more flexibility, now is the time to take advantage of the changing workforce.
Read more
Guides

Want to be the coolest parent out of all your child’s friends and throw the best birthday party? We’ve got you covered.
Read more
Health