A world record of Jack-o-lanterns 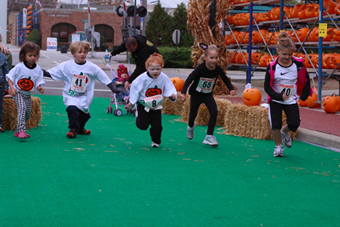 If you’ve ever wanted to be part of a record-setting event in the Guinness Book of World Records, now’s your chance. At the Great Highwood Pumpkin Fest, visitors can add their jack-o-lantern to the thousands of others for a shot at the record books.

If you want to add your own pumpkin to the record attempt, the pumpkins can be carved ahead of time and brought to the fest, or for $3 you can buy a pre-scooped pumpkin to carve at the fest. The carving knives are kid-friendly and won’t break, so parents can let their kids work away without worry, says Eric Falberg, Highwood alderman and chairman of special events.

The highlight of the event is when the pumpkins are lit. “It’s probably one of the coolest things you’ll ever see,” Falberg says. “It takes a lot of people. We start handing out lighters and people start lighting.”

This year Highwood is in a little friendly competition with the city of Keene, N.H., which is also trying to break the record on the same night, Falberg says.

In addition to the pumpkin lighting, the fest also offers pumpkin races, costume contests, a parade, pumpkin bowling, kids’ activities, live music, hay rides, a haunted house and a farmers market. The fest usually draws a big crowd, so take public transportation if you can. The train lets you off directly at the festival and is the best option, Falberg says.

Katina Beniaris -
Kids can get creative with these fun and free coloring pages for kids, which include friendly monsters, Disney characters and more.
Read more
Education