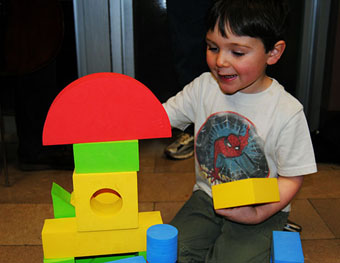 Parents of Chicago Public School students occupied the hallway at CPS headquarters for a Play In Wednesday, to stress the educational benefits of less testing and more free play in elementary schools.

“Play is the right of young children,” said Kirstin Robert, a preschool teacher at Belmont Cragin Early Childhood Center. “Play is how young children explore the world, how they build relationships, how they experiment.”

Some CPS schools implemented scheduled recess this year for the first time after decades without recess, according to Isabel Nunez, associate professor for the Center for Policy Studies and Social Justice at Concordia University Chicago. But some parents want more.

“The phrase I would like to become standard is the play gap, because there is a huge gap,” said Cassie Creswell, a parent of a 1st grader at Goethe Elementary School in Lincoln Square. “The lack of play is only made worse because there’s just such heavy academic focus.”

CPS is implementing 10 different tests for kindergarten, and seven of the tests have to be given two to three times a year.

“For CPS’s youngest children to have their valuable play time squandered on standardized assessments, which are deeply inappropriate for understanding deep conceptual understanding, it’s inconceivable,” Nunez said. “They prevent such learning from occurring.”

The Play In incorporated different forms of play including: dress up, crafts, Legos, blocks and dolls. The children interacted with each other and with the parents and teachers through the toys and singing along to music about play.

According to Nunez, toys and play teach the fundamentals of math, science, and theory of mind, which is the understanding that other people have different thoughts. For example, she said that blocks teach spatial awareness, paints teach children how to represent their worlds, and dolls teach empathy.

“When you play and when you draw, you’re really using your imagination,” said Dayla Lessem Elnecave, an A.N. Pritzker student who has been opted out of standardized testing. “You have to imagine it. You have to imagine what it looks like. It helps your brain understand about making new things.”

Dr. Dee Acklie, director of Special Education and assistant professor of Teacher education at the College of St. Mary, Omaha, Neb., said that play that involves movement is also critical for the development of elementary school children.

“Children who don’t get to move, don’t think in the same way,” said Acklie. “They bounce their feet, they shuffle around, so they’re not paying attention to what is taught.”

Acklie said that children need to move, so when they don’t get the chance to have that movement in recess, they find other ways to move that distracts from the class.

“If we spend too much time learning and not enough playing, it might be a little more harder to develop the mind,” Lessem Elnecave said.

CPS did not respond to a request for comment on the Play In.