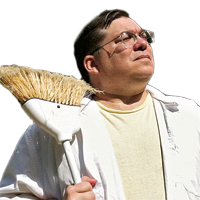 There are vital rites of passage fathers and sons must go through, the most important milestones of a father’s journey. I have experienced exactly none of them.

One was stolen by my wife, a titanic disaster on her part and all I’m going to tell you is he was 3 and it involved aiming.

All other benchmarks of tradition were ripped from my clawed, grasping fingers by my arch-rival, the un-father, a sinister, soulless substitute: My son was raised by Google.

It’s my fault. I gave him unrestricted access to the Internet.

There are parents tearing this article out of the magazine in pediatric offices all over Chicago to provide the DCFS evidence of my madness and neglect, but I tell you, the worst thing to come out of it is an affinity for high brow knock-knock jokes, Zen Buddhism, the ability to trounce me in the recollection of arcane ’70s era rock trivia-and that Google is his real father.

Google does everything better than me.

Take fishing. Classic dad. I took him out to the middle of a lake to teach him how to tie his hook with a secret fisherman’s knot handed down through my family, an heirloom knot. I reach for his rod, employing my raspiest McQueen.

“Let me show you how to tie that hoo-“

He whips his lure out into the lake like he’s on Bass Pros.

“I tied it on with an eight-fold Japanese blood knot.”

“Who taught you that?”

Later on, I take a long look at the darkening sky, note the stumpy quality of the waves and see all the locals packing it in. Years of experience have taught me these are sure signs an NFL game is on in five minutes. Awesome, I’d like to see Google teach him-

“Dad, you see how the swans are tucking their heads into their wings?”

“Aaaaactually, they know it’s about to rain so hard they won’t have time to make it to shore.”

My son pauses as if he’s taking a moment to compose a response, to level his tone so as not to insult me. Quietly, he says “I Googled it, Dad,” squinting into the distance. “I Googled it.”

Google is like a greedy stepfather stealing all my thunder. Meaningful moments are shot down before I can get the words out of my mouth with “Googled it, Dad! I DON’T NEED YOU, I HAVE GOOGLE!”

Google tells him stories, it shows him cool Zippo lighter tricks, it can teach him anything through a series of simple step-by-step videos, it’s never wrong and it never sleeps. Google’s a better father than I’ll ever be.

But I’m not going down without a fight. I’m not entirely useless. I’d like to see Google give him a hundred bucks and a ride to Six Flags.