Why your baby shouldn’t suck on your cellphone 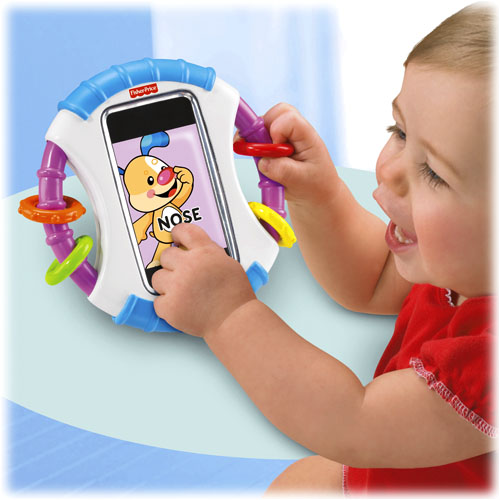 If my toddler puts a cellphone in her mouth, can she get an electrical shock?

If you frequently allow your toddler to play educational apps on
your phone, consider a case designed for a child’s use, such as the
Laugh & Learn Apptivity Case by Fisher-Price.

A: It’s not unusual to see a toddler interacting with a cellphone; many parents often engage toddlers and infants with a colorful mobile app or video on their phone as a distraction.

While offering up a little screen time can be handy, take precautions. Mobile phones are generally low voltage, but a child who accidentally chews on the attached electrical cord or charger can be seriously hurt. Other hazards when a child puts the phone in their mouth include:

Germs. Cellphones are covered with them. In fact, they are among the most germ-infested items in a household.

Older phones. Phones built just three or four years ago may have buttons or switches that can break off and become a choking hazard. These phones also may include small parts like microchips or batteries that can become loose and pose a serious danger if ingested. Older flip phones or units with a sliding keyboard can pinch a tongue or lip.

Glass. Many of today’s cellphones are made with glass faces. Some parents use phones that have been damaged but are still functioning. A phone with a cracked glass face or broken casing can scratch or cut a child’s mouth if they chew on the phone.

Bottom line? Apps may be designed with kids in mind, but mobile phones are not. It can be tempting to let your savvy 3-year-old sit down with a mobile device to play with an educational app while you throw in a load of laundry, but an unsupervised child can be seriously injured.