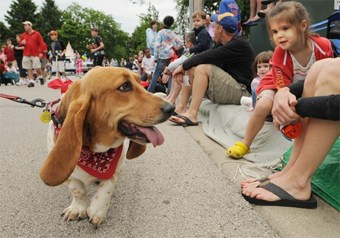 In some cities, families fire up the grill, uncover the pool and declare the official start to summer on Memorial Day. LaGrange residents reserve that honor for the annual Pet Parade, which winds its way through the suburb’s center on the first Saturday after Memorial Day every year.

The parade, celebrating its 65th anniversary this year with a “Still Rockin’ at 65” theme, is a well-loved tradition in Chicago’s western suburbs. All along the mile-and-a-half route, an estimated 100,000 onlookers crowd the sidewalks to stake out a view of one of the country’s largest pet parades.

Local marching bands stroll the streets followed by drill teams, floats, sports mascots and hordes of clowns. The grand marshal, a role usually filled by a local celebrity, sports figure or dignitary, heads the two-hour affair. The participants number in the thousands. But there is no question who hogs the spotlight at this shindig. Hundreds of kids accompanied by their furry friends-real or stuffed-strut proudly along the parade route. Dogs, cats, snakes, lizards and horses, many of them in homemade costumes, get in on the action each year.

A panel of judges deliberates over which kid-and-pet pairs are the best dressed and awards prizes in four categories: Dogs and Pals, Pets and Pals, Petless Pals and Pals on Wheels. They pay special attention to the creativity in the costume and how closely it fits the theme, which is Clowns on Parade this year.

The LaGrange Chamber of Commerce started the parade in 1947 as a way to garner attention for local businesses. Edward Breen, the event’s biggest advocate, nurtured it for 58 years, watching it grow into a widely known yearly tradition. Today, Pets and Pals Charities sponsors the parade to promote animal care awareness.

Susan Breen married into the pet parade dynasty and has helped coordinate the massive volunteer effort for the past 20 years.

“My personal favorite would be the children,” she says. “It’s really always the kids, their costumes, their excitement that day. Everybody’s happy on parade day. It signals the beginning of summer.”