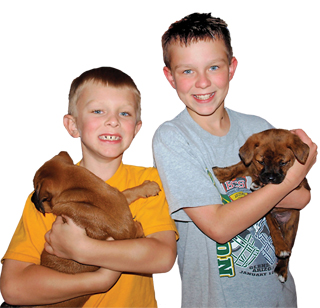 Nine-year-old Avie Magner watches out her front door, waiting expectantly. It’s been two weeks since her latest foster dog, Shadow, was adopted by the Schroeder family: Jim, Shannon and their children, Maggie, Jack and Tommy. Today they are coming for a visit.

Call a nearby shelter or rescue group or contact one of the
rescues in this article:
Alive Rescue: aliverescue.org
Great Lakes Lab Rescue: greatlakeslabrescue.org
New Leash on Life: nlol.org/chicago
Chicago Pet Rescue: chicagopetrescue.web.officelive.com

It’s a coming home of sorts for Shadow, a happy-go-lucky black lab, who spent eight weeks as a foster dog at the Magner home with parents Allison and Reid, and their children, Avie and Kaden, 6. Over the past year, the Magners have fostered three dogs from Great Lakes Lab Rescue, headquartered in Elmhurst: two floppy-eared puppies, Austin and Abby, and then Shadow, a 1-year-old female who had been surrendered by her owner and was facing euthanasia because of overcrowded shelters.

Avie remembers the day the family said goodbye to Shadow when she was adopted by the Schroeders.

“All of us really cried and cried,” she says. “I made Shadow a dog toy with my new sewing machine.”

But today, there are squeals of delight as Shadow greets Avie and the rest of her foster family again, this time just for a visit; Shadow has found her forever home.

Helping with the transition

Although animal fostering isn’t for everybody, many families are finding that taking in a pet for a short-term commitment until a permanent home can be found is rewarding.

By all accounts, animal foster homes help alleviate overcrowded shelters and lessen the instances of animal euthanasia-the American Society for the Prevention of Cruelty to Animals estimates that between 3 and 4 million animals are euthanized each year. Some animal rescue groups rely almost completely on foster homes to keep animals out of kill shelters.

“If you go to a shelter, there are really not enough volunteers to get to know every dog in the shelter. …(The foster families) get to know the quirks; the good the bad and the ugly. It helps the transition.”

Fostering as a win-win

Michele Gil and her husband started fostering pets in their home in Edison Park five years ago, once their two sons were both in school.

“Every rescue group, for the most part, will give you what best fits your needs,” says Gil, who is an approved pet foster for three rescue groups. “If you know you can only handle a 10-pound dog, they’re not going to give you something the family isn’t equipped for. You can decide the best fit for your family. I think that’s what a lot of people are scared of-that they’re going to get some enormous dog and they live in a condo. You can choose what you want.”

For Gil, fostering is a way to save the lives of pets that otherwise might be euthanized, but she says there are definite teaching moments for her kids, as well.

“My kids have learned so much about spaying and neutering, how that’s important,” she says. “We’ve had dogs that have come in that have been abused, and they’ve helped me rehabilitate these dogs.”

Fostering animals is a great way to do a “trial run” to see if your family is ready to adopt a pet. “Foster failures,” families who end up adopting the animal they’re fostering, are common.

For some, the long-term commitment of adopting a pet may be too much, but fostering is a good alternative for children begging for a Scruffy or Fido.

“To be honest, I don’t think I’ll ever have a dog of my own,” says Sarah Makinney of Elmhurst, who fosters for two local rescue groups. Her three daughters, ranging from preschool to fifth grade, look forward to meeting each new foster dog.

Makinney says fostering has been a perfect fit for their family.

While the arrival of a foster dog or cat can be exciting, saying goodbye can be difficult.

Amber Nesbitt Wood, one of the directors at New Leash on Life in Chicago, says parents need to talk to their kids about why the animal is there.

“Some approach it like, ‘We’re babysitting the dog,’ or ‘the animal doesn’t have any parents and we’re holding on to it until he can find them.’ It makes the children feel good about having them there, but also happy when they’re gone, because it means they’ve found their family.”

Kristen Gerali, founder of Alive Rescue in Chicago, agrees, saying parents she’s worked with have done a great job of explaining to the kids why fostering is important.

“While it’s a little bit stressful for the kids, they do learn compassion,” she says. “They learn about what’s going on with the homeless pet overpopulation.”

Michelle Fruge, mom of Mia, 6, and Eden, 4, says saying goodbye is often harder on her than the kids.

“I cry my eyes out,” she says. She is already preparing herself for saying goodbye to her current foster, Mick, a puppy recuperating from surgery. Fruge has a soft spot for senior dogs, but took in Mick because of his special medical needs.

To become a foster home for animals, most shelters and rescues supply an online application. Before fostering, a home visit will be conducted to determine if the home is safe and suitable for fostering.

Dogs and cats are routinely checked over by a veterinarian and brought up to date on vaccinations before entering a foster home.

For Allison Magner, dog fostering helps her teach her kids about participating in something that matters.

“It’s a good thing to show the kids, how they can give to their community and be part of something,” she says. “More at a grassroots level, more than just giving funds.”

Carol Pavlik is a freelance writer from Elmhurst.