Pediatricians confess: We don’t always follow our own advice 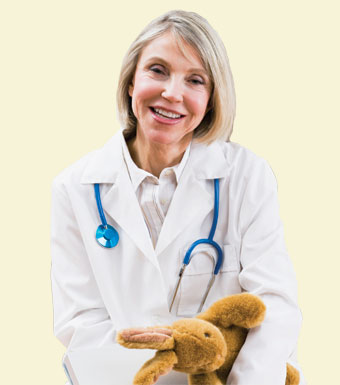 No baby bottles allowed in the crib. No pacifiers for school-age children. No sweets or caffeine before bedtime.

Such pediatric staples are echoed by doctors across the country to millions of obedient or, at least, well-intentioned parents.

But Polin, of Town and Country Pediatrics in Chicago, has a confession to share with you: He doesn’t always follow his own advice for his own children. And he’s not alone in the “do as I say, not as I do” ranks of Chicago-area pediatricians who also are parents.

For instance, Polin’s 13-year-old son watches television much more often than he would recommend to other parents. Polin explains this by admitting real-world circumstances sometimes get in the way of textbook recommendations.

“Sometimes I’m a better pediatrician than a parent,” Polin jokes.

Dr. Amberly Brewer, a pediatrician, also struggles with the “too much TV” dilemma for her 6-year-old son, Samuel, and her 16-month-old son, Oliver.

“There are days when our 6-year-old gets more than his allotted two hours of screen time,” says Brewer.

The same goes for her younger son, who enjoys watching “Thomas the Tank Engine” in the morning despite the recommendation that children under 2 not watch TV at all.

“I’ve never been able to figure out how this is remotely possible in the winter when he has an older sibling and lives in the middle of the great Midwest tundra,” she says.

Brewer says no parent can be perfect, not even when that parent is a pediatrician armed with “every possible rule for parenting.”

“As parents, we try to do the best for our children, but mistakes will happen,” she says.

“I admit parts of that first year of motherhood are a sleep-deprived blur,” she says.

One incident she will never forget is waking up in the middle of the night to the sudden wail of her 8-month-old baby boy. Her husband brought Samuel into their bed so she could nurse him.

“Our routine at the time included reading books and cuddling Sam before placing him to sleep in his pillow-free, bumper-free, blanket-free crib,” she says. “But, being the tired parents we were, we fell asleep and Sam fell asleep right along with us on my husband’s chest.”

Sam soon slid off his father’s chest right onto the floor, with a thud, she recalls. He was unharmed, but it was a “very scary moment of truth” for the young parents.

“I like to say that one of my jobs is to advise parents of best practice recommendations. However, it is ultimately the parents’ jobs to make the best informed decisions they can in the context of their own personal and cultural values.”

In other words, guidelines are just that-guidelines, pediatricians say.

“They are road maps designed to help us minimize the hazards and maximize the potential that every child and parent faces,” Brewer says. “Some rules, like use of safety belts, need to be followed rigidly, while other rules, like timing when to wean an infant to a cup or graduate from a crib to a bed, are more flexible.”

Dr. Shelly Vaziri Flais, a Chicago pediatrician, author and mother of four, straddled the doctor-parent line while breastfeeding her twins. Official pediatric guidelines emphasize breastfeeding babies for six months, if not longer. But Flais breastfed her twins for only three and a half months.

“I still feel guilty about it,” says Flais, who penned the 2009 book Raising Twins, From Pregnancy to Preschool-Advice from a Pediatrician Mom of Twins.

Flais has since learned, however, that any amount of time a baby is breastfed is still beneficial.

“Moms can take comfort if they breastfed their baby for only six weeks. The baby received the optimal nutrition and immune factors for that amount of time.”

Flais understands firsthand how hard it can be to obey every rule and recommendation when life’s circumstances get in the way, even for doctors.

“We’re human too,” she says. “You just do your best and educate yourself to the gold standard guidelines.”

Dr. Timothy Ames confessed to sending his children back to school the day after they had a fever.

“To heck with this waiting 24 hours after the last elevated temperature,” he says, recalling what he told his children. “You look good to me, kid, go get to work.”

In another instance, when his older son was 3, Ames struggled getting him to sleep at bedtime.

“Somehow I thought if I explained to him loudly and in great detail how upset I was that he kept getting out of bed once I had tucked him in, he would take the hint and leave me alone,” Ames says.

“My priest had to give me my own advice about just putting him back in his room without discussion, so that I could prevail with my superior patience and stubbornness,” he says. And it eventually worked.

Brewer agrees, admitting that she and her husband have been “abysmal failures” at getting their sons to sleep through the night as infants and young toddlers. This, despite reading and trying many “guaranteed” sleep method books that have made their authors very wealthy, she notes.

Dr. Lisa Gold, a Crown Point, Ind., pediatrician, labels her early parenting recommendations as “B.C.”-before she had children of her own. She would strictly advise what she was taught in residency school.

For example, absolutely no baby bottle after the first birthday. Period.

“I firmly would express this recommendation at the 9-month office visit in preparation for the D-Day,” she says. “Then came my first child,” she recalls. “What? The bottle gone at 1 year old? I don’t think so.”

She lingered past the one-year mark for her son, Nolan, and then slowly weaned him from it completely by the time he was 15 months old.

“Since then I have modified my recommendations, and I definitely don’t scold the parent who still is giving a bottle to their 15-month-old,” she says. “But we talk about the process of weaning.”

And those impressive parents who have their child off the bottle at 1? She asks them, “Wow, how did you do that?”

On the flip side, Brewer is proud to note that she advocates and follows to a tee many of her own recommendations to other parents.

Her son is one of the only children in their neighborhood who consistently wears a bicycle helmet. She’s a stickler for things like proper car seat usage and lathering up her kids with sunblock, then reapplying it frequently. And neither of her children has a television in their bedroom.

“That being said, some non-AAP-approved things (American Academy of Pediatrics) have occurred in our household,” she freely admits, while her toddler plays with his older brother’s “not for children under 3” toy.

Then again, she is trying to resist the urge to exchange that Hot Wheels toy car for her son’s blanket, “binky,” that she’s trying to put away for good.

Gold mentions other popular recommendations from pediatricians that often don’t get obeyed, such as don’t give in to temper tantrums and don’t respond to a whining child.

“I can’t think of any physician who didn’t break those rules,” she says.

Brewer agrees: “I don’t disagree with or lack faith in any advice I might give. I just can’t comply with it all of the time. That doesn’t mean that I won’t keep trying.”

And neither should other parents.

These 8 reading apps for kids are sure to help them get excited about reading this school year and beyond.
Read more
At Home