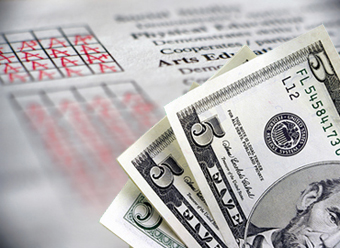 If you ever want to start a lively discussion among parents, ask them what they think about paying kids for good grades or for excelling at a sport. Then sit back and listen to the heated banter.

Most parents seem to fall squarely into one camp or the other. Some feel money is a great motivator and a realistic indicator of how the world works. For others, paying for grades sends the message that money speaks louder than the value of a job well done.

For some students, getting paid can be a huge incentive, driving them to accomplish something they weren’t motivated to do on their own. For others, money just isn’t a motivator, and no amount of cash reward is going to make them do what you want them to do.

Janet Bodnar, author of Raising Money Smart Kids (Kaplan) and the “Money Smart Kids” column on kiplingers.com, recommends first trying a non-monetary reward such as a special dinner, lots of praise or a favorite dessert.

If parents want to pay, she recommends trying a temporary monetary promise.

“Tailor the monetary reward to a specific situation, say one grading term, to get a grade up,” she says.

But she cautions parents to take an active approach when doing this.

“Go to the teacher and see if they need more help, go over the homework every night, show them that it’s not just a dollar sign floating out there but something that you’re in together,” she advises.

Parents who are opposed to paying point out that just as we teach our children good manners and kindness, we also need to teach them the value of a job well done.

Jeny Wasilewski of Palos Park remembers going to her parents after learning that her friends got paid for grades.

Another consideration is that kids are less likely to work creatively when offered money, performing for a grade rather than trying something new or taking on a challenge. And some students have true learning disabilities that no amount of money can change. In fact, it could do more harm to teetering self-esteem.

But while most experts caution against paying for grades, parents who have tried it are often amazed at the results. It can work particularly well if your child is close to reaching a goal but needs an extra push.

“I offered my daughter money as an incentive to get straight A’s,” says Karen Weiler of Elmhurst. “I knew it was a reachable goal and I wanted her to see that she could do it. And she did.”

Joelle Masolowski of Orland Park and mother of two boys agrees. “We give the kids money for a straight A report card. It’s more as a reward for demonstrating hard work, responsibility and effort. They don’t expect it … it’s just a treat for a job well done.”

And while $20 may seem like a lot to shell out, it’s cheaper than hiring a tutor. For older kids, it could even get them scholarships in the long run.

In today’s world of competitive sports, money speaks at any level. Spend some time at a youth athletic competition and you’ll see parents shelling out for making baskets, scoring goals or runs or reaching a particular score.

Dr. John Mayer, an adolescent psychologist in Chicago and president of the International Sports Professionals Association, cautions against this.

“Paying for performance doesn’t teach responsibility, motivation, focus, desire, passion or even skill development,” he says. “Great athletes will tell you that they developed outstanding skills by putting in the extra time without anyone rewarding them. They were intrinsically motivated to succeed.”

Bodnar agrees. “Sports are a voluntary activity. If parents feel they must offer a reward, tie it to a very specific situation,” she says.

Mary Beth Moore, parent of three, has seen the other side of those rewards.

“My kids have been on sports teams with kids who were monetarily rewarded for baskets in basketball and it was horrible!” she says. “They never passed the ball because they were only focused on making a basket.”

However, done in moderation, Masolowski has found that paying her boys when they do well in hockey gives them a huge boost.

“We’ve given them money for scoring four or five goals in a game. But we’re also big on promoting the team aspects of sports. Sometimes passing, playing your position and defending your goal are more important to your team than scoring,” she says.

As with all aspects of parenting, every child and every situation is different. Bodnar reminds any parent who is considering using money to motivate, “Reward the effort, not the results.”

Brought to you by Grant & Eisenhofer P.A.
Read more