Putting Chicago playgrounds back into play 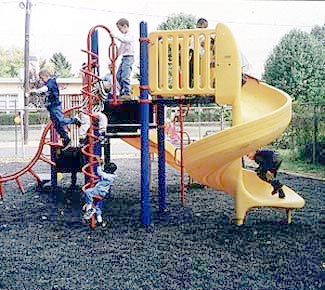 Moments on the playground are often vivid childhood memories: the pungent smell of fresh mulch beneath feet, the squeak of bare legs on a slide, tennis shoes gripping a metal ladder, pauses for breath after a game of tag.

Though most public playgrounds in Chicago were in fair condition, impoverished neighborhoods with a higher population of children had playgrounds with more equipment and surface problems, according to a study in the February issue of Pediatrics. Due to age, many playgroundsneed to be replaced, but there are less expensive ways for the Chicago Park District to improve playground quality.

“In a dense urban environment like Chicago, it’s really important to have outdoor spaces for kids to play in,” said Dr. Karen Sheehan,a pediatrician at Ann Robert H. Lurie Children’s Hospital and professor of pediatrics at Northwestern University Feinberg School of Medicine. “It’s incredibly important for development. The ladder from a slide lets them look at the world from a different perspective, and sand helps with fine motor skills.”

The Chicago Park District worked withLurie Childen’s Hospital and Friends of the Parks, a non-profit, park preservation organization, to evaluate almost 500 parks in the city from 2009 to 2011. Playgrounds were assessed in four main categories: age-appropriate design, fall surfacing, which is the surface underneath the playground equipment, equipment maintenance and physical environment.

Erma Tranter, president of Friends of the Parks and coauthor of the study, said most of the findings were consistent with what she has found in almost 10 years of studying playgrounds across the city through a Kohl’s Cares For Kids Safety Network grant.

“They are heavily used in our neighborhoods,” she said. “In the poorer neighborhoods, there are fewer resources. There are no ballet classes or taekwondo [Korean martial art], so the playground is the place for them.”

The study found the most common problem involved fall zones, where woodchips used as the foundation for the playground became compacted from children playing. In some cases, the asphalt from before the parks were constructed had started showing through.

“It’s not equipment that causes so much of the trouble,” Sheehan said. “Weusually see injuries due to falls, so the surfacing is so important to get more adequate depth.”

Between 1988 and 1993, 500 public playgrounds were built in Chicago. Theaverage life of a playground is about 15 to 20 years, so many of the playground systems need to be replaced. The problem, said Tranter, is the expense of replacing an entire playground.

“In ’88 to ’93, [the park district] was capable of building 100 a year, andnow they are trying to do 25,” Tranter said. “We are looking at what kind of system we could put in place that would allow them to do more a year.”

The Chicago Park District was called for comment on future plans forplayground improvement, but did not respond by deadline.

Sheehan said she was impressed with how willing the park district has beento improve playgrounds, but she wants to make sure the playgrounds are improved based on need in the neighborhood.

“We saw dramatic improvements-some are older and need to be replaced-but they were very responsive, which is great,” she said. “What we need to do more of is bring in different sectors together.”