Parents struggle when kids are gay

To learn how gay parents will be counted in the 2010 Census, click here.

When Toni Skwarek’s 18-year-old son Joey told her he was gay, she felt the blood drain from her face. Skwarek began to pace the room. “Are you sure?” she asked him several times.

Joey was absolutely sure. He’d known since middle school, but he didn’t know who to tell or how to tell them. Now he was tired of keeping it a secret. “I didn’t jump for joy and go ‘Yippee, I have a gay son!’ I was in shock,” Skwarek says. 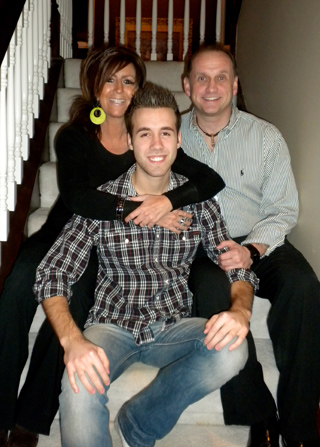 Toni and Wayne Skwarek with their son, Joey.

But not long after, Skwarek was looking at a baby photo of Joey when she realized things hadn’t really changed. This was still the baby she’d carried for nine months, the boy she’d loved since the minute she set eyes on him. “I had felt I lost the child I thought I knew,” she remembers. “But he was the same; what changed was my interpretation of him and of what I wanted for him.”

Skwarek and her husband Wayne decided the best way to handle the situation was by being open and supportive of their son. With Joey’s permission, they told family and friends. They made sure Joey knew they loved him and that they would never be ashamed of who he is.

Still, when he had his first boyfriend, reality hit home for his mom. “It’s one thing to accept it; it’s another to see him with somebody. … Knowing there’s another man in his life instead of a girlfriend. This is a different journey.”

One of Skwarek’s first thoughts was how tough this journey would be for her son. Even though she thinks this generation is much more accepting than her generation, she still sees the discrimination her son will face and she is afraid. “I hope, I pray that (the government) will recognize marriage,” she says. “I want them to have the same rights as you and I. I want them to have the same rights with children. If one of the partners is sick in the hospital, they have no rights. Insurance-they have no rights.”

Most of all, like any mother, she wants him to find love and happiness. She worries that this life is hard, and that he’ll grow old alone. “I hope he finds someone and is happy and has kids,” she says. “And I hope he is not discriminated against.”