What is the origin of “Trick-or-treat”? 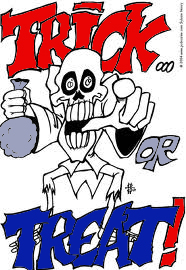 When I was a kid, my parents used to tell me that when they went trick-or-treating, they would have to perform a trick – a dance, a song, a magic trick, a joke – in order to get the treat. This always seemed odd to me, not because I don’t believe in paying for what you get, but because the conjunction is wrong. It’s trick OR treat, not trick AND treat.

But according to the UK website phrases.org, in the Scottish tradition of “guising” children dressed up in disguises and went from door to door performing for an edible treat or a shilling or two. The practice goes all the way back to the late 19th century, according to Wikipedia, but is still in use – and only recently has started to include candy over more healthy snacks and, unfortunately, is starting to lose its performance bent.

Let’s not forget that Halloween is the eve before All Souls Day, which some cultures still honor. In England, poor people would traditionally go “souling” – begging for alms in exchange for prayers for the dead. Chaucer made a reference to it (possibly in it’s more pagan form) in the 14th century. And in 1779, it was referenced in John Brand’s Popular Antiquities of Great Britain: “On All Saints Day, the poor people go from parish to parish a Souling, as they call it.”

By all accounts, this begging was looked down upon by society as a whole, but there was enough superstition about the dead that people felt compelled to participate.

In America, that compulsion to participate often took odd turns, and wasn’t widely practiced until the 1930s. On the east coast, Scottish, Irish and English immigrants brought their guising or souling traditions with them, and changed them according to new times and new influences. But somehow the term “trick-or-treat” first started on the west coast, where it was a threat to vandalize one’s house unless given adequate edible sustenance.

According to phrases.org, the earliest known citation of the term “trick-or-treat” in print is from The Oregon Journal on November 1, 1934. The headline was “Halloween Pranks Keep Police on Hop,” and the story included the line, “Young goblins and ghosts, employing modern shakedown methods, successfully worked the ‘trick or treat’ system in all parts of the city.”

In 1938, the Reno Gazette wrote, “Trick or treat was the slogan employed by Halloween pranksters who successfully extracted candy fruit from Reno residents. In return the youngsters offered protection against window soaping and other forms of annoyance.”

Protection? I can just see it: “Hey, ya got a nice house here. It would be too bad if your windows got soaped up or your wagon wheels suddenly ended up hanging from that tree.”

The best piece of information on phrases.org was about an account in The Helena [Montana] Independent newspaper:

“On 2nd November 1938, [The Independent] reported that some of their readers had not taken kindly to being given ‘an offer they can’t refuse’ by small mask-wearing ghosts and ghoulies and, although they were threatened with little more than some impromptu window soaping, they expressed their annoyance in no uncertain terms – by shooting at the little devils.”

So there you have it. No matter what you may think of the state of our country today, at least we don’t have bands of kids in ghost costumes running a shakedown and protection racket – and we seem to have gotten past the angry homeowners willing to spray them with buckshot. That’s something to think about as we worry that our kids might get too much of a sugar high.

Have a safe and happy Halloween, or All Souls Day, whichever you prefer.