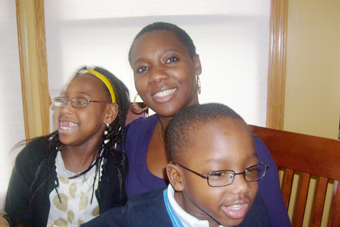 My journey to motherhood literally began with a siren-flashing, horn-blaring ride to the emergency room.

That was eight years ago. Today, like every other day, I reflect on how the turns and curves of life have made me stronger, bolder and with a new appreciation for everything.

On that day, though, I went for a scheduled OB/GYN visit. The routine blood pressure check showed preeclampsia. My blood pressure at times reached 195/120.

My husband was called, an ambulance requested, and off we were on the whirlwind ride to a hospital 45 minutes away. I was 28 weeks pregnant.

That night at the hospital, via an emergency C-section, my daughter Angel was born weighing a mere 1 pound, 15 ounces and suffering from interuterine growth restriction due to inadequate nutrition caused by preeclampsia.

The doctors fought to save her life while I battled for three days to get stable enough to get to see her. When I did meet her, all I saw was this fragile being, about the size of her father’s hand, struggling to breath.

Regardless, my love for her was instantaneous.

Angel’s battle with the complications of prematurity began almost immediately with an intestinal perforation that would require multiple surgeries and months of hospitalization.

One week shy of her eight-month birthday, I finally was able to bring her home.

Two-and-a-half years later, as I longed to add to our family, we began another journey, this time filled with hope, faith and care from a specialized team of doctors.

Despite all our efforts, though, I had preeclampsia again; this time at 33 weeks. I was emotionally done. I was so terrified of going down the path that Angel had taken, I practically shut down and anxiety took over.

We were blessed with a little boy, Lani, who weighed 3 pounds, 1 ounce at birth. I was able to bring him home after three-and-a-half weeks, weighing 3 pounds, 13 ounces.

Today both children are living miracles. Angel is in third grade and has won awards at school. Lani is in kindergarten. I am fine, rid of anxiety attacks and able to counsel other preemie parents that hope is on the horizon.