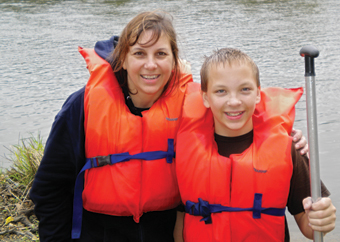 ‘Your son has Asperger’s.”

My arms raised in triumph as if I had just scored the winning goal at the World Cup. Oops. I quickly dropped my arms. Probably inappropriate…

My husband and I had finally learned that our son had, as we had suspected for years, Asperger’s syndrome.

Were we devastated by the news delivered by the room of white coats with a multitude of letters after their names at Children’s Memorial Hospital? No, not at all.

Sean was our first child. He was a fussy baby. He didn’t like to make messes. He liked his toys just so. I remember having to slowly introduce light to him in the mornings. As an infant, he would actually sleep at my large family gatherings. He made all the milestones.

So did we suspect anything was amiss? No…

Not until that first day of 3-year-old preschool.

What I had passed off as a child’s quirkiness was actually called stimming. Sean would stop playing, beat himself about the head and chest and then, without skipping a beat, go back to doing what he was doing.

His sitting on his head on the couch (like Mork from Ork in the ’70s sitcom “Mork& Mindy”) was another sign of the type of stimulation Sean needed.

The lack of eye contact was not simply shyness, the answering of “great” to every question not a sign of a precocious toddler.

Something was amiss with our beautiful boy.

One evening I came across a magazine article from the Sunday paper. The boy in it had Asperger’s syndrome. I read it and said, “Oh my, Sean has Asperger’s.”

I showed it to my husband, Rich. His first reaction was, “No way.” And then he read it.

Only our pediatrician listened.

It took us a long time to get through the waiting lists at Children’s Memorial. During those months that turned into years, I heard every comment from, “You need to be a better parent,” to, “You spend too much time with him. You need to get a job and put him in day care.”

My declarations of “But we’re getting him tested…” were only met with “Mrs. Lehning, you’re in denial. He’s a behavior problem.”

So on that day years ago, we not only got a diagnosis, but also validation. We trusted our instincts. We knew our son.

And while Sean having Asperger’s has made for some extremely challenging days and nights, it has also meant that we look at life differently.

We stop. We slow down. We celebrate our uniqueness.

He’s our amazing, wonderful son. And in our eyes, he’s absolutely perfect.