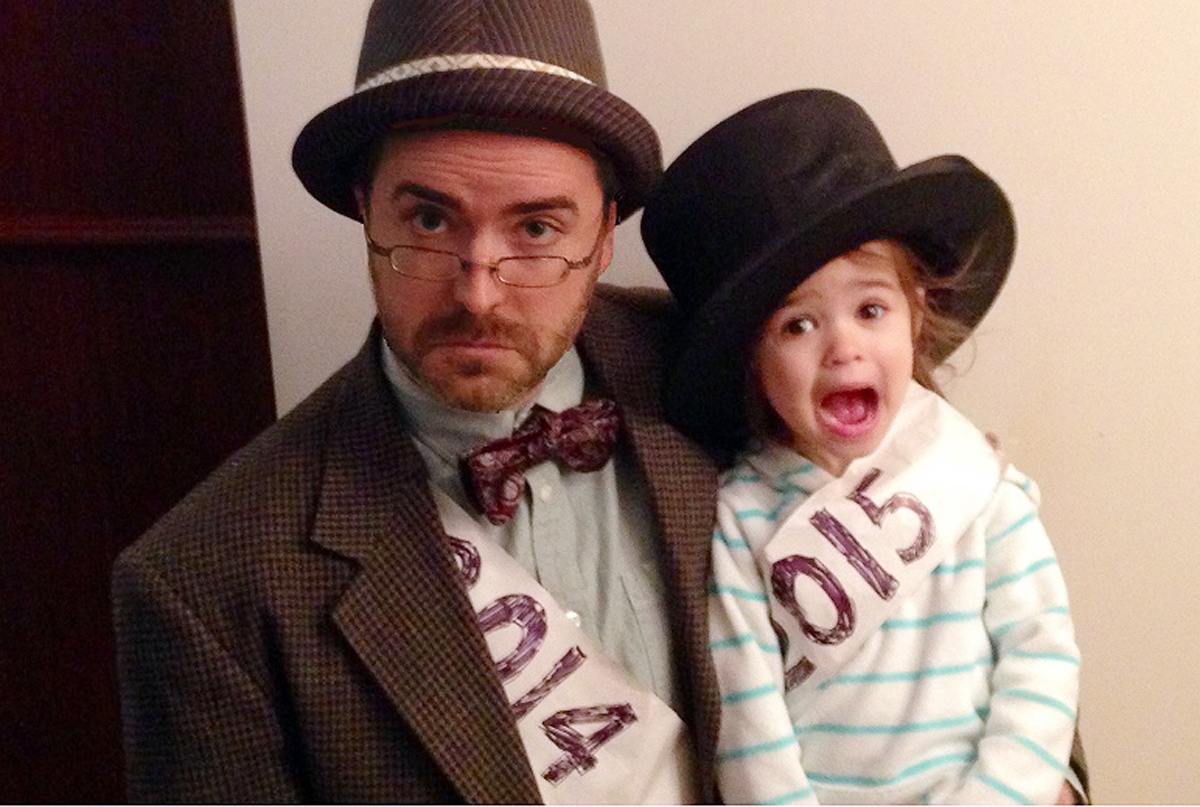 This week’s blog post is by WDP co-host Matt Rocco, who lives in the Edgewater Glen neighborhood of Chicago with Professor Foster ( his “Brown Mom” wife), and their daughter Viva, who wants to know why your Atari-2600 didn’t have a touch screen.

When you’re a parent, the slightest word or glance from your child can send you into an existential crisis or a slough of insecurity. The very birth of your offspring starts a loud clock ticking in the back of your head that says, “the replacements are here … your expiration date nears.” The latest statement from my three-year-old to put me into a pity spiral was proclaimed from the breakfast table: “Daddy, what apps did you play on the iPad when you were my age?”

My answer underlines the difference between my Generation (the children of the Boomers who grew up in the 70’s and 80’s, commonly labelled “Gen X”) and our children (generally born late in our lives, the generation following the dreaded Millennials, currently called “Gen Z”).

New Year’s Eve is approaching, and since the turning of a New Year is traditionally taken as a time to stop and boozily reflect on how the passage of time is ravaging your mind, body and soul, I thought I’d share my response to Baby Viva with you, the Chicago parent:

“Sweetie, when I was your age, we didn’t have apps or iPads – the closest thing was something called an “Etch-a-Sketch,” which was like a pen and paper but vastly more frustrating and less effective. It was designed to teach children learning how to draw, that they couldn’t draw.

We did have computers, but they were larger than a microwave and only good for writing down recipes, which was also more effectively done with a pen and paper. The games we played on them involved typing the words “Walk North” and then getting eaten by a Grue. We have no idea why computers caught on enough to develop into something useful/fun.

We didn’t get anything to play with at the table – we had to eat with no technology at all AND no shelf-stable salad creamy salad dressing –  if you wanted anything besides Italian or whatever that horrifying orange-red Catalina stuff was, it involved a tub of sour cream and a pouch with a cowboy on it. So we ate pouch dressing and Kraft Cheese and Macaroni when it was still a hyperactivity fueling Space-Age orange (another pouch) with a big pitcher of Funny Face kool-aid stuff made from pouches of saccharine and for dessert we had a pouch of Lik-M-Aid while we listened to our parents talk heatedly about hostages in Iran and blowing up Disco records at (old) Comiskey while they wore jeans that accentuated their own pouches, so we grabbed a pouch of “Big League Chew” and left the table. We didn’t have apps – we had pouches.

So while you watch your favorite shows at the table with that iPad, or toddle over to the DVR to watch hundreds of hours of recorded shows or the dozens of all-kid TV stations on Dish, remember that we had to forage for children’s television. If we got up early enough we got a half hour of Bullwinkle, which was old and full of jokes we didn’t get (the Kirwood Derby?), or Bugs Bunny, which was REALLY old and full of jokes we REALLY didn’t get. (Groucho Marx? Edward G. Robinson? Who were these people? And what are War Bonds?), then we either watched local clowns giving away twenty dollar bills and Schwinn bicycles to kids we didn’t know for throwing ping pong balls in buckets (is there an app for that now?) or an hour or so of the sweet, sweet, half hour toy commercials we craved, followed by junk like reruns of “The Courtship of Eddie’s Father” on WFLD. Seriously, I DEFY anyone of your generation to watch even five minutes of “The Courtship of Eddie’s Father” – it was terrible, had been off the air since before we were born, and no matter how long you watched or how mad he got, Eddie’s Father NEVER turned into Lou Ferigno!

We couldn’t really go outside because of all the vans full of kidnappers and Satan worshippers circling our houses playing Black Sabbath tapes and rolling Dungeons & Dragons dice, but if we did go outside we couldn’t go to delightful rubbery Tot Lots, or a big shiny Bean, or a Maggie Daley Skating Ribbon.

Navy Pier was rusty and creepy and a scene from “The Color of Money,” not a Children’s Museum, and Northerly Island wasn’t a family nature paradise and concert stage, it was an airport for rich guys and a scene from “Flight Simulator.”

What we could go to was horrible rusty playground equipment built specifically to injure children in the 50’s and 60’s and composed primarily of Tetanus, Asbestos, Thalidomide, DDT and Agent Orange. There, we roleplayed Russian invasions and Vietnam POW rescue fantasies with black plastic M-16s with no orange tips while teens in denim jackets and Ray-Bans tried to sell us Angel Dust.

And if we rode in the car … again, no apps, no personal DVD players, not even cupholders … just a Chevy Nova without the seat belts fastened and a radio I’m pretty sure only played Jethro Tull flute solos.

So, you see, my little darling – we didn’t have any apps when I was your age, or any personal data equipment. We had boredom. Endless, crushing ennui and, dare I say, malaise. You and yours may never know boredom – you will grow up in a golden age of stimulation, distraction, enrichment and entertainment. You are not riding along queasily in a grown-up world – you are waited on hand and foot by industry upon industry dedicated to your betterment and pleasure.

Although, to be fair, we had the Polar ice caps, which you’ll never remember … so I guess it all evens out.”

Brought to you by Academic Approach
Read more
Outdoors

Enjoy some sensory-friendly fun in the city and surrounding areas.
Read more
At Home

After watching this sequel, try these activities with your family including a talent show, baked treats and dance party.
Read more