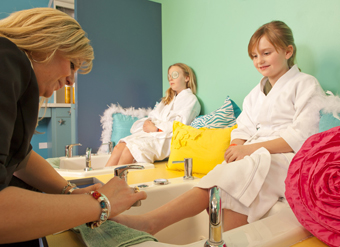 Grace had a faraway look on her face.

The din of children playing in the nearby arcade and families walking by on their way to the water park next door didn’t faze my 11-year-old daughter.

As her feet were lathered with scrub and her legs massaged, she seemed oblivious to the noise outside The Enchanted Lagoon kids spa at KeyLime Cove Water Park in Gurnee.

Unlike the adult spa-far from the water park, arcade and kids’ play area-The Enchanted Lagoon is right in the middle of the action. And that’s by design.

“This is where the kids mostly are,” says Assistant Spa Manager Deanna Dostalek. “Adults like the quiet and peace. But kids want to have fun and get dolled up.”

KeyLime Cove officially unveiled the kids spa earlier this year to give 3- to 13-year-olds a place of their own to get their hair, nails and makeup done.

“We got a lot of inquiries at our big spa. We really wanted to create something for the kids and keep it separate,” Dostalek says.

The most popular service is the $25 20-minute pedicure Grace was getting. Young customers also like the make-your-own lotions, scrubs and lip gloss at $9.95 each.

Grace enjoyed the rest of the water park, too, as did her 7-year-old brother Jack. One of their favorite spots? The kids’ play area, where every few minutes water would rain down from a giant pineapple.

We stayed courtesy of KeyLime Cove to sample the spa, restaurant and water park.

The kids both loved the suite, though the standard rooms will do for many families as they’ll spend most time in the park anyway.

You won’t want to spend a lot of time in the restaurant, based on our experience; the service was indifferent and the food unforgivably bland for a place with tropical aspirations.

On balance, though, it’s a convenient substitute for a trip all the way to the Dells, and the spa gives the kids one more thing to do.