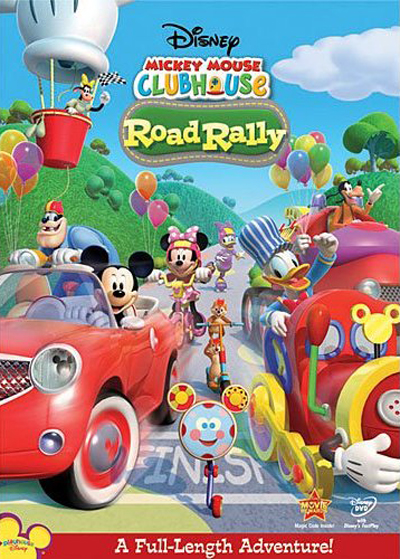 Fasten your seatbelts – a new primetime special from Disney – “Mickey Mouse Clubhouse Road Rally” – will air on Sept 7 from 7-7:30 p.m. ET/PT on the Disney Channel.

In the music-filled, family-viewing event of the Emmy-nominated series, Mickey, Minnie, Donald, Daisy, Goofy and Pluto, along with Clubhouse pals Toodles (who in a surprising new move by Disney, now has a face and talks), Pete, Clarabelle Cow, and Chip and Dale embark on the first annual Clubhouse road rally. Each friend chooses their favorite mode of transportation (think trains, cars, scooters, skates, and more), and Goofy even gets the chance to ride in Professor Von Drake’s latest invention, the Clubhouse Rescue Truck.

Once the race kicks into high gear, the gang goes on a journey through sandy desserts, snow-covered mountains and tropical jungles in search of clues. As the rally goes on, Toodles feels unappreciated when the Rescue Truck gets all the praise for helping out, and he decides leaves the group just when they need him most. It’s up to Mickey and pals to reunite the team and make it to the finish line.

The special features five new songs performed by the sensational six themselves, and “Mickey Mouse Clubhouse Road Rally” will also be available for purchase on DVD from Walt Disney Studios Home Entertainment the same day of premiere.

The DVD will also feature a never-before-seen bonus episode, “Pluto Lends a Paw.”

Make some fun holiday memories with your family by cutting down your own Christmas tree this year.
Read more
At Home

Whether you want to go back to work, go part-time or want more flexibility, now is the time to take advantage of the changing workforce.
Read more