My Life | A new pet stirs up old memories 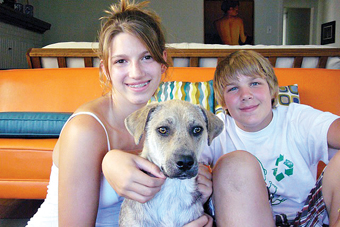 Today we met Sadie. Chocolate eyes, four large paws to grow into and a demeanor as sweet and laid back as molasses. While we didn’t sweep her up and take her home, we have since e-mailed the rescue shelter to express our interest in adopting her. We are hopeful, looking at dog crates, talking about leashes and collars, and wondering if the kids will respond to her as we have. In a word, we are giddy.

Sadie is four months old, a pup that we will train, walk and, certainly, fall deeply in love with. So why does my stomach feel uneasy? Is it the potential that shoes may get chewed, carpets “marked” and coarse hair embedded into everything we own?

Strangely, no. It’s that meeting Sadie reminds me of the day I finally became an adult.

I was always the mature one in high school-good grades, leadership roles with extracurricular groups and a regular teacher’s favorite. I ratcheted up the responsibility factor in college, carrying a capacity class schedule while also working full time. I married, then had a child, but still I was not prepared for my moment of truth: the moment I was faced with the decision to euthanize my cat, Agnes.

I had been married for nearly 10 years, had a toddler and just moved my family from Oregon to Illinois due to my husband’s job promotion. While we waited for our new house to be built, we lived in an apartment complex fondly referred to as “the prison” for its thick concrete walls and characterless form. I returned from work a little early one afternoon and was greeted with haunting moans and howls that sent chills across my skin.

We had two cats, Vana and Agnes, whose arrival in our lives pre-dated our marriage. My husband picked up Vana in a shelter in Iowa, moving her to California when he came to live with me. Lonely at the house all day while we worked, Vana soon had a playmate in Agnes, a six-week-old bundle of fleas and fur, also rescued from the local humane society. With her kohl-rimmed, Cleopatra eyes and tender suckling at our earlobes, Agnes quickly nestled into our home and our hearts.

She had always been a sickly animal, requiring a great deal of care and attention, but I knew immediately the howls that filled the apartment that afternoon were of a completely different sort. When she finally appeared, her slanted side steps and glazed, terrified eyes were utterly frightening.

The vet told me that Agnes had likely had a massive stroke, her left side severely affected and her brain struggling to make sense of the world. While only advanced testing would confirm her diagnosis, the doctor felt her prognosis for any sort of recovery was extremely limited. She said Agnes could come home, but predicted she would not live long, possibly a day or two, and little could be done to ease the disorientation and fear that plagued her.

Agnes was 12 (70 in “cat years”), not especially old, but far more geriatric than anyone who knew her as a kitten would have imagined considering her seriously sickly beginnings. Still, she was my fluff ball. What was I supposed to do? Where was the rule book that told me which way to go?

Weeping into her fur, I told her that I loved her as the vet gave her the shot that would stop her heart and end her agony. Alone with her, I’d never felt such a depth of sadness, such a tremendous loss. As I left the vet’s office that day, I knew myself in a completely different way. I felt then, more than 10 years ago, and I still feel it now-that was the day I really grew up, the day I became a card-carrying adult standing on my own two feet.

My son wasn’t quite 2 when we lost Agnes. For months afterword, he would squeal with delight as we drove by the strip mall that housed the veterinarian’s office, “There’s where Agnes went to heaven!” He was so thrilled for her, gazing up into the clouds hoping for a glimpse of our furry angel.

As we wait for approval on our adoption of Sadie, my stomach twists as I recall the heartbreak of that painful day. Ironically, the same memory also brings a smile, conjuring the deep love Agnes and Vana brought me (Vana passed similarly the next year with massive kidney failure). That love is cathartic I guess. Quickly the knot in my stomach loosens and I find myself feeling grateful and mature enough to let go of the pain and again welcome a pet into my life with open arms.

Linda Stephens is a mom, who works as a marketing consultant, and a writer. Sadie is now a part of her family.