In 1974, three Chicago Lamaze instructors found themselves overwhelmed with questions from expectant parents. These soon-to-be moms and dads were looking way beyond when to push and when to breathe-they wanted help finding day care, choosing a pediatrician, picking a car seat. And they wanted to hear it from those who had been there before: other parents. 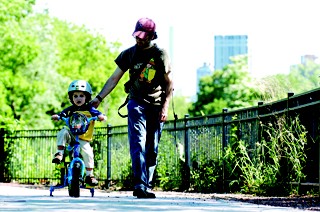 Ian Smithdahal and his son, Gabriel, 3, in Lincoln Park. Smithdahl says Neighborhood Parents Network has helped him navigate the ins and outs of raising a kid in the heart of the city.

So Mary Harris, Roz Woodward and Jo Miller organized a phone hotline to try to provide some answers. Over the next several years, small phone trees and babysitting co-ops sprang up around the city and its suburbs. In 1980, one group, centered around Chicago’s North Side neighborhoods of Lincoln Park and Lakeview, rebranded itself as the Northside Parents Network.

These parents saw themselves as somehow different, in the trenches. While their peers were suburb-bound, they were navigating uniquely urban issues: gentrification on the city’s North and West sides, upheaval in the public schools and finding parking for their station wagons amid soaring real estate prices.

“Raising a child in a city like Chicago is just a different experience, a little less intuitive,” says Nancy Sinclair, who joined NPN when her first daughter was born in 1980. “There are all these challenges, which is why so many people end up leaving for the suburbs. We’re the ones who stay.”

Thirty years later, NPN is still a mainstay for Chicago’s parenting community. Its name is now the Neighborhood Parents Network, and its membership, 4,500 families strong, stretches from Evanston to Hyde Park to the far West Side.

From a budget of just under $4,000 and an all-volunteer staff in its early years, NPN has grown to 12 paid employees and a 2010 budget of $290,000, money that goes toward its annual school fair, newsletter and events, from prenatal yoga to “Parent University” courses. The school fair draws almost 100 organizations and its new website will launch this fall, designed as a hub of Chicago tips, parenting advice and events.

“It’s a way to make the city feel smaller,” says Sarah Cobb, the group’s executive director since last fall. “It can be easy to get lost a little, especially when your neighbor might be a college student or an elderly couple.”

Neighborhood Parents Network is not a PTA; most families phase out by the time their kids are in kindergarten, when school communities start to take over. It is not purely a “meet-up” group either, though events like zoo walks, park play dates and neighborhood coffees are a big part of its programming. And it is not solely a professional parenting advice organization, though tips on choosing doctors and “let-your-baby-cry-it-out?” fly through its local chapters and online discussion forums.

It is a little of all those things: the largest and most diverse parent network in the city, with three decades of insider tips on what it takes to raise a child on the potholed streets of Chicago.

From panic attack to play group

In today’s world of Facebook and Twitter and 26 million mommy bloggers, it’s hard to remember parent networking before the Internet age. But in the early days, NPN reached new members with postcards alerting them to events in their area.

In the spring of 1980, one of those postcards arrived at Sinclair’s Lakeview home, inviting her to a drop-in coffee at Gill Park. Her first daughter, Katie, was a few months old and she was having trouble finding other first-time parents amid the Wrigleyville bars and condos cropping up around the stadium.

“I can’t tell you how valuable it was to find that community, that group of other parents all trying to do exactly what I was doing,” says Sinclair, who attended a Memorial Day barbecue this spring with several members from that group.

NPN had stopped sending out postcards by the time Cobb had her daughter in 2001. She came to the group the way most of today’s members do: word of mouth. She and her husband were older than most first-time parents, and many of the friends she would have turned to had already done the panic thing.

“I had nobody who was exactly where I was and I had all these questions,” says Cobb, who joined the board of directors soon after. “A co-worker said to me, ‘You’ve got to check out NPN.'”

So she joined a new moms’ group and found immediate comfort in the home of another first-time mother. Meetings turned into mornings at the park and, as the kids grew, discussions about preschools over coffee.

“I went from panic attack to play group in about 10 days,” she says. “It was great to find all these women who were not only dealing with the same thing I was, but had actively chosen to find people to share it with.”

A voice for parents

In the beginning, NPN was a loose organization run entirely by volunteers. Locations and events varied from week to week. The wife of the pastor at St. Luke on Belmont was a member, so they started holding meetings in the rec room. An early popular program was “Mom’s Morning Out,” where parents could drop their child off for a few hours and run errands.

Programs popped up in response to interest. A member with writing experience started a newsletter, where parents could take out classifieds for babysitters or advertise strollers for sale.

NPN also responded to issues of the day. As car seats became a hot topic in the 1980s, the group started a program to educate parents on the new safety recommendations. When charter schools moved into Chicago in the early 2000s, questions about education became more pressing, so NPN started a school fair. The first year, 20 schools, mostly preschools, attended. This year, nearly 100 attended, and NPN is considering a similar event for day care centers.

“Most of our programs have been really organic,” says Lee Haas, president of the board of directors. “People have a question and realize other people have the same question, and so we try to figure out how to get some good answers.”

As NPN’s membership rolls have grown, so has its public profile. Earlier this year, its leaders met with Chicago Public Schools CEO Ron Huberman to talk about mobilizing city parents on behalf of new budget priorities.

As the numbers have changed, so, too, have the faces. Once centered in the largely white, upscale neighborhoods of Lincoln Park, Lakeview and Roscoe Village, NPN now stretches across the city and into Evanston and Oak Park. More than 700 families attended an event in heavily Hispanic Pilsen in March, and over the years, the organization has sprouted play and support groups for single parents, adoptive parents, Asian parents, same-sex parents and dozens more.

The group’s programming has also evolved. In the 1980s and 1990s, potluck dinners and babysitting drop-offs made up most of the calendar; today, NPN’s “Parent University” series brings in experts to talk about raising a “green” family and navigating the ins and outs of school choice.

But Cobb insists that beneath all the changes, NPN’s core mission remains grounded in the same simple premise: gaining confidence by connecting with other parents.

“I think we provide some answers to important questions, and we try to stay relevant, but sometimes just knowing there are other people out there with the same questions is the more valuable part,” she says. “That hasn’t changed in 30 years, and I don’t think it will ever change.”

Ian Smithdahl, a stay-at-home dad who joined NPN when his son, Gabriel, was born four years ago, says the group’s deep city roots set it apart from other “meet-up”-type organizations.

“You can always find people who want to have a cup of coffee or talk about burping,” he says. “But people at (NPN) know Chicago and they know parenting and they know how to be parents in Chicago.”

Brought to you by Sacred Heart Schools Chicago
Read more
You

Brought to you by Lincoln Park Zoo
Read more
Guides