What you need to know about your child’s Facebook profile

In the ever-growing world of social media sites, Facebook is king. It went from an exclusive network that opened at about a dozen college in 2004 to the sixth-most trafficked site in the world. It has more than 350 million active users, which means that if Facebook were a country, it would be the world’s fourth-largest.

But late last year, Facebook made some changes to its privacy policy and the tools that allow users to control who can see their information. If you haven’t checked over your child’s profile in a few months, you may want to do so now, and here’s what you need to know to keep your child safe online.

The changes can seem confusing, but they actually simplify some of the smaller privacy tweaks that Facebook has made over the past few years.Users now have the same set of choices when deciding who can see information about them: share it with everyone on the Internet, Facebook friends and networks, friends of friends, only friends or a customized group.

The last is a particularly useful option if, for example, your child is having problems with a certain group of kids at school. (But be warned – it’s also a useful piece of information if your child wants to keep certain information from you.) 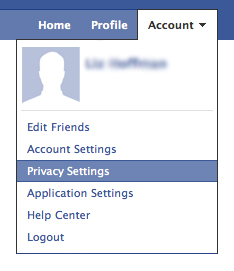 1. Visible information. Part of Facebook’s draw is convenience: When you log in, you immediately get a “news feed” showing all your friend’s recent activities. Pictures from their family vacation, changes in relationship status (they went from being “in a relationship” to “it’s complicated” — uh oh!), and their new favorite band, all in tiny nuggets of information on your home page.

You can keep your information from being shown in other people’s news feeds by adjusting your privacy settings. But in December, the default setting for who can view your information became “Everyone.” That includes everyone on Facebook and, depending on your other settings, anyone who searches for you in search engines like Google.

FIX IT: You now have to manually select who can see your profile updates and activities. Go under Settings, then click Privacy.

2. Tagging. One of the longest-standing complaints about the tagging feature is that the person who originally uploaded the photos has the power to tag anyone they want. If your child is tagged, he or she can “untag” themselves, but that feature only works until the person who owns the photos decides to “retag” them. This can leave your child overexposed.

FIX IT: Go to Settings, then Privacy, then Profile, the “Photos of Me.” You can make all photos and videos in which your child is tagged visible to certain groups — friends, friends of friends, only you, etc. But remember — the default is now everyone, so make sure you do this manually.

This fixes the tag, but does not delete the photo; only the person who uploaded it can do that. This is a good opportunity to explain to your child that while he may have thought the picture of him mooning the camera/chugging a two-liter bottle of Mountain Dew/writing on his best friend’s face with Sharpie was funny, a potential college or employer down the road might not agree.

We live in the world of Google, which is getting better and better at compiling all the tiny bits of information that exist about each of us online.

Something to consider, however, is that visibility isn’t necessarily a bad thing. Companies and job seekers spend thousands of dollars to get themselves on the first page of search engine results and, while your child obviously isn’t a business, it’s not a necessarily a bad idea for them to have control over what shows up when people Google their name.

FIX IT: Settings, Privacy, Search. Here you can adjust how your child’s name shows up in searches on both Facebook itself and in search engines.

One final suggestion: Make these changes with your child sitting next to you, and talk about why you’re making them. Privacy settings are really just the last lines of defense against the very worst of the online world. It’s far better in the long run to teach your child how to be smart online — who to talk to, what kinds of information to share, and how to know when something seems fishy.

There’s a saying: “Give a man a fish, he eats for a day. Teach a man to fish and he eats for a lifetime.” Online safety is roughly the same idea. You can shield your child from the Internet with a few clicks of your mouse, but the future is clearly online, and it’s better to teach them how to be safe there.

Try one — or all — of these easy breakfast ideas for kids when the school year begins.
Read more
Sponsored Content

Brought to you by Academic Approach
Read more
Advice

From boogers to pen caps, here's why some kids can't seem to keep strange and stomach-turning things out of their mouths.
Read more
Advice

An expert explains what kids should be taught about safety in large crowds and at public events.
Read more