NBC’s “Parenthood” is good, but… 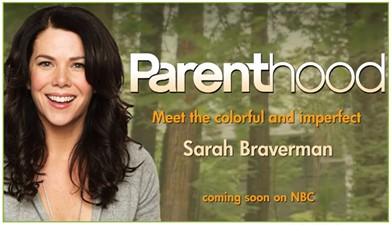 After two weeks of heavy promotion during the Olympics, NBC’s new family drama, “Parenthood,” premiered on Tuesday. The short version: It was pretty good.

The longer version: It was pretty good, and despite some surprisngly lackluster dialogue, a few unecessary plot twists, and a penchant for stereotyping, I’ll be tuning in next week. And you should, too.

Quick plot summary: Loosely based on the 1989 movie by the same name, the show follows the Braverman clan, five grown children, their families, and their aging parents. Single mom Sarah Braverman (played flawlessly by Lauren Graham with the same plucky wit she brought to “Gilmore Girls”) finds herself out of money, and must move back home with her parents, with her two surly teenagers in tow. All five Braverman kids have their issues, from Julia, the workaholic mom, to Adam, whose son, we find out, may have an autism spectrum disorder.

The show seems uncomfortably stuck between comedy and drama, though I suppose actual parenthood walks that line, too.

It’s also prone to stereotypes, the most flagrant (and disappointing) of which is Julia Braverman, the youngest of the five kids and a successful lawyer. Almost immediately, Julia is slapped with TV working mom fatigue. You know what I mean: It starts with the classic scene where she should be enjoying a parenting moment (here it’s a family photo at an amusement park) but then her Blackberry rings and it’s a call she simply has to take. And three scenes later, while she’s putting her daughter to bed, the little girl asks if Daddy can sing her a song instead. And then two scenes after that, Julia’s guilt-tripping in the kitchen about how she’s a bad mother, etc. etc.

She’s a one-dimensional, neurotic character, and working moms deserve better than that

All that said, the show was pretty good, and confirms what we’ve seen on the airwaves this year with ABC’s “Modern Family,” the CW’s “Life Unexpected,” and the continued success of ABC’s “Brothers and Sisters” : the family show is back. Not since “Malcolm in the Middle” went off the air have we been treated to such nutty, relatable portrayals of the American family. And it’s refreshing.

It’s also worth tuning it. “Parenthood” airs Tuesdays at 9 p.m. CST on NBC.

Most parents don’t know that any school can call itself Montessori. We talked with one of just two AMI Recognized Montessori schools in Chicago to learn why this accreditation matters.
Read more
Sponsored Content