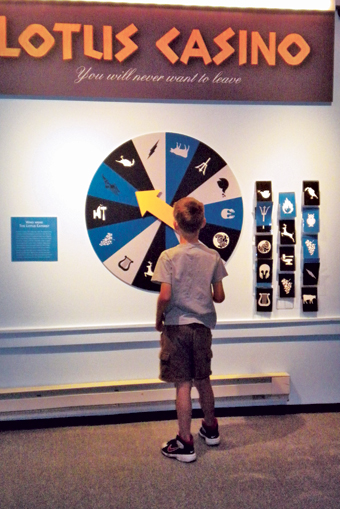 Greektown’s National Hellenic Museum is on a mission to connect generations through Greek history, culture and art. Its world premiere exhibit, Percy Jackson and the Olympians: A Look Inside the Lightning Thief, brings alive for young fans the movie and book series by integrating movie props, posters and trivia with the history and long-lived impact of Greek mythology.

Having never visited the museum, we weren’t sure what to expect from a fourth floor office space above Greek Islands restaurant. (The museum is currently building a larger space scheduled to open in October 2011.)

Rounding the corner to the museum space, we were met by a floor-to-ceiling mural depicting the timeline of Greek civilization. My sons spotted names and images they recognized and were astonished to see the dates go back so many thousands of years. While reading the Percy Jackson book series, my 9-year-old has become familiar with many Greek myths and characters, so he was excited to get to the main attraction.

In the exhibit rooms, we took an up-close look at props from the Fox 2000 film and read about how plot points are connected to ancient myth. My older sons tested their god and goddess knowledge at the “Lotus Casino,” while I read a children’s version of The Odyssey to my 5-year-old. We also used a magnet board to spell out our names using the Greek alphabet.

Since the exhibit doesn’t take that long to explore, try visiting on one of the days the museum offers interactive experiences for kids. Through the end of August, Fridays from 10-11 a.m. are Mythical Mornings for age 3-7. Museum staff introduce legends and gods of Mount Olympus and discuss a different Greek myth each week.

On Wednesdays, 10-11 a.m., children ages 6 to 13 can participate in mosaic making. Children complete their choice of design using plastic and ceramic stones they can take home. The exhibit is scheduled to close Sept. 4, so get there while you can.