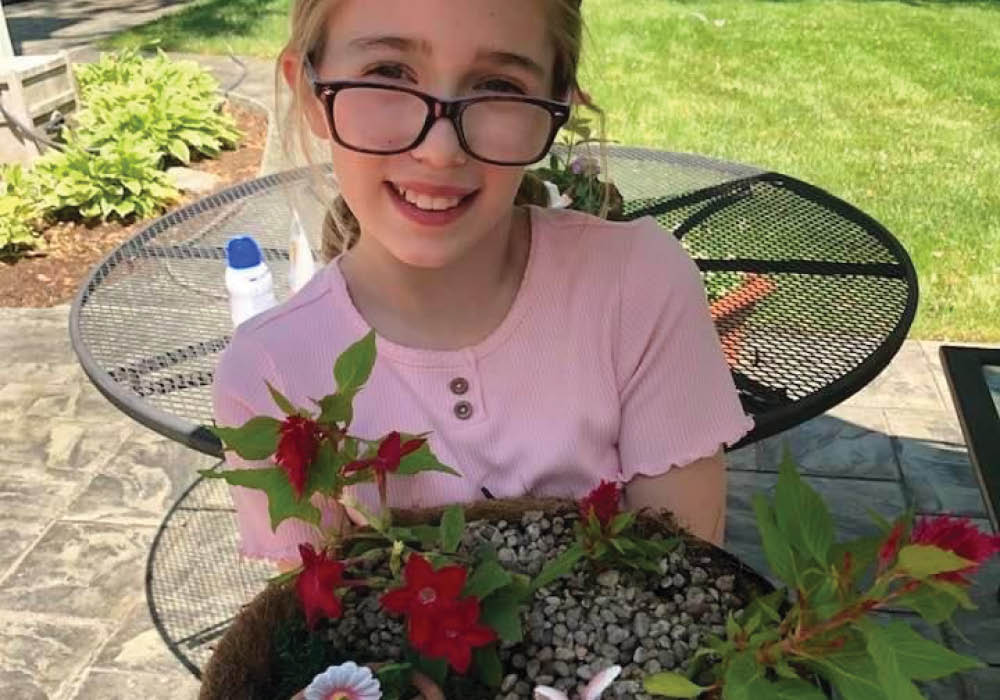 Ten-year-old Jane Temple was devastated when local businesses in her hometown of Naperville closed during the COVID-19 pandemic, and then again, during the riots.

The fifth grader, who watched her backyard garden flourish during quarantine, had an idea — use the surplus of her mom’s flowers to make homemade floral baskets and sell them, with the profit supporting local businesses.

“I felt so bad that they had to close because of Covid,” says Jane. “And then again after the broken windows. It worried me that [business owners] may not be able to feed their children because they were closed for so long.”

It was then that Jane and her Mom, Shelly, began a mother-daughter service project, sourcing empty hanging baskets from Home Depot, and shopping for accessories at Big Lots and Hobby Lobby. Once purchased, Jane turns her backyard into a workshop, filling the baskets with dirt, flowers, rocks, a fairy and fairy accessories, a process that takes about 15 minutes to specially arrange each basket. Jane sells them for $35, with the $7.50 profit benefitting her fundraiser. At press time, she had made more than $1,500 in donations for local businesses.

“I have heard so many stories about why people are buying them – that it is more than just me and Naperville,” says Jane. “They buy them because it reminds them of somebody, or they are giving them to somebody to make them happy.”

Jane’s creations have been so popular, she’s making her way through a lengthy waitlist! However, Jane says she’ll continue to make them as long as she finds baskets and nice flowers. To order yours, e-mail her mom at shellytemple43@gmail.com.

“I love that my children are always looking for someone in the community with a need and coming up with a project to fill it,” says Shelly, who has four other children. “My children and their friends seem to always make time for what is important, and it never ceases to amaze me.”

Looking for a fun evening out with the family? Get a drink at one of these places.
Read more
Guides