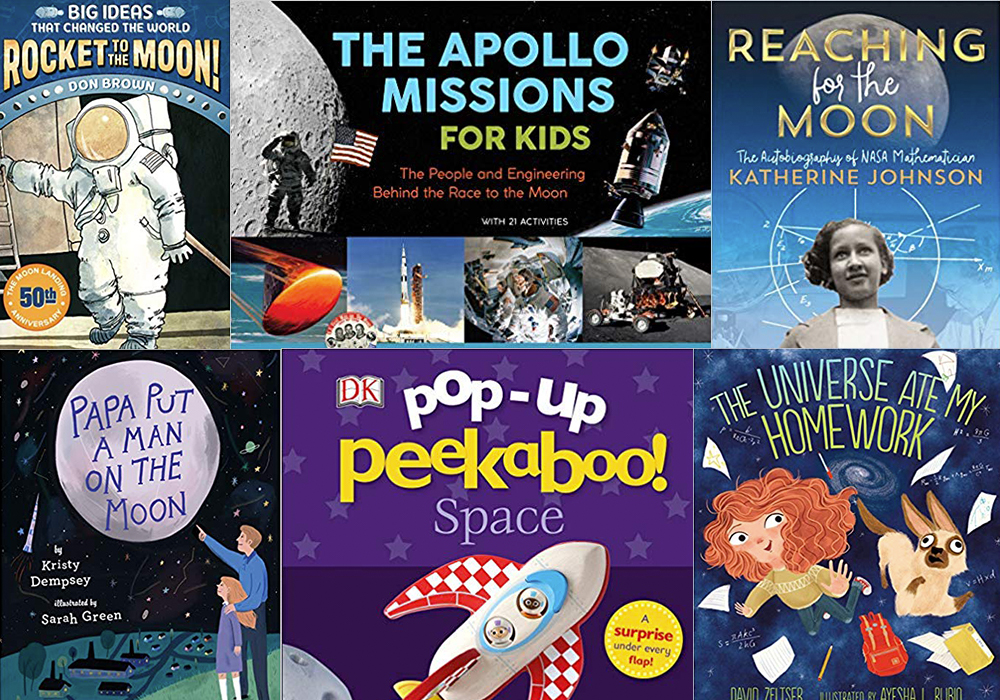 Preparing for the 50th anniversary of the moon landing, publishers ramped up book creation to help kids better understand space and the race to the moon. From books about the astronauts to the Apollo missions and the mathematicians who put them there, readers of all ages will better understand how Neil Armstrong took one small step.

Told in a bright rhyme, the pop-up book teaches counting and concepts like liftoff and parts of the rocket. Younger readers will love the surprises under every flap.

Imagine if dinosaurs had started on the moon and not on Earth. Would they ride on comets and take vacations on Saturn? With brightly colored illustrations and imagination to run wild, dino fans and space enthusiasts alike will enjoy the witty tale.

Field Trip to the Moon, by John Hare

No, the words to this book didn’t get lost in space. Using only pictures — and letting little ones use their own words — a young traveler discovers more about the moon during a school field trip. Kids will love making up how the story should be told.

Papa Put a Man on the Moon, by Kristy Dempsey

This book is told through the eyes of an early elementary-aged girl whose father works in a textile mill that has started creating the lining of the space suits for the Apollo missions. The book honors the hundreds of workers around the country who helped put men on the moon in ways that they thought of as “another day’s work.”

The story, with delightful illustration from Mike Gordon, asks and answers what girls can grow up to be. A young “princess” wants to be anything and everything, including an astronaut, a queen and a chef. Her parents encourage her every step of the way.

Nanda is a youngster who dreams big and watches as the world around her grows smaller as she grows up and dreams of space travel. Watch the images behind the pictures as they swirl with geometric shapes, fractals and math.

The moon wishes for a friend, but the dinosaurs won’t visit, the sabre-toothed tigers won’t visit and humans haven’t sailed to her yet. The moon watches as a man starts to create the first rocket and sends a monkey to space in a Mercury module. She waits and waits for her first visitors. Told from the perspective of the moon, preschoolers and early readers will learn a brief history of how man reached the moon.

Harriet Henry is a young cellist who isn’t fond of crowds. She wants to play her music alone, but even the owls outside come to bother her. Enter, the moon. As Harriet learns about her new friend, she also learns about courage.

For kids still too young to know the movie, “Hidden Figures,” this book tells the story of Katherine Johnson, a mathematician at NASA. Johnson computed the figures that sent John Glenn into space, and turns 100 later this year. The story includes math problems that kids in first and second grade will know and understand.

The Moon Book, by Gail Gibbons

Updated for the 50th anniversary of the moon landing, The Moon Book explains to young readers how the moon differs from a star, about astronomers and orbit, phases and historical legends about the moon. This book is perfect for kids showing an early interest in space.

The Universe Ate My Homework, by David Zeltser

Abby doesn’t like to do her homework. So, she creates a black hole. As she learns about the physics of space and space travel, she also still has to finish her homework. A delightful tale for any kid (every kid) who hates homework.

The DK Life Stories series includes not only a biography of the subject, in this case mathematician Katherine Johnson, but also timelines, historic photos, quizzes and a glossary of important terms. Middle readers will learn more about Johnson and her life in NASA as well as how math helped put someone on the moon.

Big Ideas that Changed the World: Rocket to the Moon, by Don Brown

Told through the medium of a graphic novel, kids will learn the full history of space travel with narrator Rodman Law (a real parachutist). From origins of combustion to the combustible engine and pictures that show it all, this is a fun way to learn history.

The Apollo Missions For Kids, by Jerome Pohlen

Best for ages: 9 and older

The entirety of the Apollo Missions, from the deadly fire on Apollo I to the end of Apollo in 1972, the book gives in-depth looks at each mission and what it accomplished. In addition, there are 21 activities for kids to learn for themselves about gravity, shadows, craters and the other moon-related exercises.

Reaching for the Moon, by Katherine Johnson

Best for ages: 10 and older

Mathematician Katherine Johnson tells her own story of how she learned to love math, her obstacles being a woman in a male-dominated profession and being black in Jim Crowe Era America. She graduated high school at age 14 and tells her story to middle-grade readers with ease and interest. Filled with pictures from her childhood to a building named for her by NASA in 2017, the book includes stories about Johnson’s family life that weren’t included in the movie “Hidden Figures.”

The Space Race: The Journey to the Moon and Beyond, by Sarah Cruddas

Best for ages: 10 and older

With an in-depth look and pictures of the Apollo missions and beyond, older readers will enjoy learning about how missions to the moon inspired later space travel. The book includes explanations of jobs for those interested in working in space travel, questions about life within our solar system and missions to Mars and beyond.