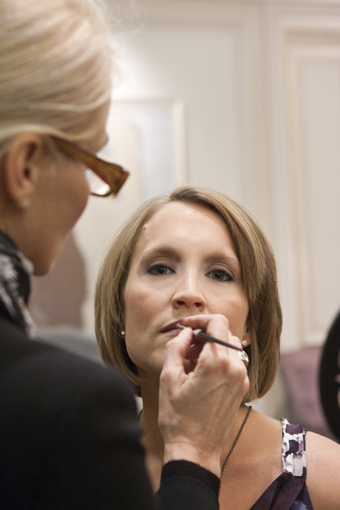 Loretta Winger, president of LOOKS, took on Megan’s makeup. She used LOOKS Mineral Photo Touch concealer in Megan’s T-zone area, then used Baked Powder on the outer edges of her face. For her eyes, she used Nude Matte for an eye shadow primer, Gilded eye shadow to contour the eyelids and black mascara on the lashes. She used Crystal Blush on her brow and cheek bone, then LOOKS Tea Rose lip liner and Super Sweet lip gloss on her lips.

Less is more Use bronzer on the outer edges of your face, highlighting the temple area, cheek bone and jaw line, plus a little bit down your neck. Do not put bronzer all over your face. For great eyes Brush a light shadow over your entire eyelid and underneath the eye with a power primer. Use a contour color in the crease (but not too dark to avoid making the eye look deep set). Use the darkest shade of your shadow for right along the lashes.

Want to be the coolest parent out of all your child’s friends and throw the best birthday party? We’ve got you covered.
Read more
Health

A new study suggests that more video game time might have benefits for children’s brain development.
Read more
At Home