A spoonful of “Mary Poppins” 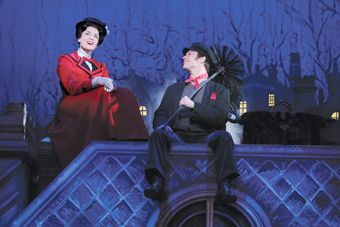 “Anything Can Happen” and in this “Mary Poppins,” you leave believing it. The story is based on the beloved tales of P.L. Travers and the Walt Disney movie, but the version on stage at the Cadillac Palace Theatre diverges from the familiar storylines. This Mary Poppins leads the Banks children and the audience through adventures both familiar and new. Sure the kids meet up with chimney sweeps on London rooftops, but you’ll not find any runaway carousel horses or dancing penguins in this production.

Truthfully, it took my family (all avid fans of the movie musical) some time to acclimate to the storyline changes and new music. In this stage adaptation the plot more consistently centers on the repair of a broken home. But, just as in the film, Mary Poppins is the true star of the show. And, in the leading role, Rachel Wallace is “Practically Perfect.” With a powerhouse voice, graceful dancing and delightfully humorous poise, she keeps the momentum moving forward and the mood magical.

Likewise, Nicolas Dromard as Bert (cleverly used to narrate and make scene transitions seamless) is a true triple threat. Likeable and charming, he can also sing and dances like an old-fashioned movie star. The second act’s “Step in Time” led by Bert and the chimney sweeps is a show-stopper. I haven’t seen a full stage tap number in quite some time. This one was worth the wait, especially when Bert taps his way up the stage walls and dances upside down.

As with most musicals, the ensemble numbers are the highlights. In addition to “Step in Time” the modern interpretation of “Supercalifragilisticexpialidocious” had us dancing in our seats. The choreography, by Matthew Bourne and Stephen Mear, has the perfect blend of old-style charm and modern movements. Their work shines in “Jolly Holiday,” a radical departure from the movie with granite statues combining modern dance with traditional ballet.

What really makes this production worth the Cadillac Palace experience are the astonishing sets. My sons were blown away by the Banks House, which moves and opens and turns around and lights up. The house anchors the show and is used to great effect. The designers have also done a fantastic job of integrating special effects, including Mary Poppins in flight, so the story still feels magical, especially to children.