Calling all band geeks! March with the Northwestern band 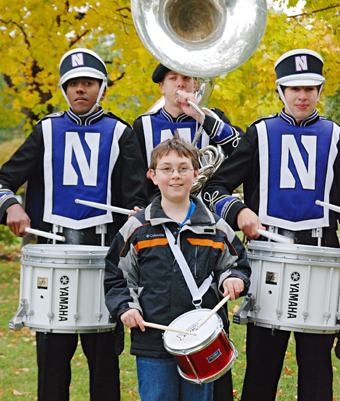 Every fall, the Northwestern Wildcats marching band members don their purple uniforms and line up on the practice field to put on a different kind of show. There’s no football team on the field, no roaring fans in the stands.

Instead hundreds of children surround the musicians. Those kids will grab their kazoos and toy drums for the chance to march with the band as part of Northwestern’s Kids Fare concert series.

“It’s an unforgettable experience for them,” says Richard Van Kleeck, director of concert activities at Northwestern’s Bienen School of Music. “And it’s a great entry point to get to kids. They might see an instrument and say, ‘I want to learn to play the drums or the tuba.'”

Introducing kids to different types of music can start while they’re preschoolers through offerings such as Northwestern’s Kids Fare and the Chicago Symphony Orchestra’s Kraft Family Matinees.

The CSO opens its doors to children with one-hour concerts that can also include theater and dance. “As opposed to a seated concert, we have live musicians who demonstrate instruments; we have instrument petting zoos,” says Cayenne Harris, CSO director of learning and access initiatives. “We offer music adults might hear, but we offer it in a way that is engaging and accessible to kids.”

Kids learn about more than just music when they attend a concert. “They’re learning how to sit in a group and listen,” Van Kleeck says. “They see young people doing something together as a group, that it’s fun to make music and that, by grouping together, you can make a great sound.”

And remember that Chicago is home to all different types of music. “Expose your kids to many, many kinds of music and see where they feel a connection,” says Harris.

Looking for a fun evening out with the family? Get a drink at one of these places.
Read more
School Issues