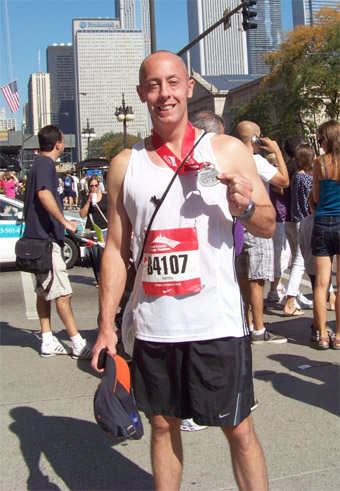 So there’s this guy.

A Chicago policeman. A devoted husband and father. A Cubs fan living in the heart of White Sox country. He has served honorably in the U.S. military. He plays baseball with the neighborhood kids. He’s the son of a fireman. A brother of a paramedic. He is universally described as a great fellow. A man’s man. Someone who will help out neighbors, friends, and strangers without thinking twice.

He will help you unless of course you happen to be fleeing arrest. In which case, you’ve got a long way to go before you can outrun this guy. 26.2 miles to be exact. He’s a 5-time marathon runner. His wife is known to express some frustration over the tattered pants he wears home as a result of giving chase to criminals who hop fences and walls. He views it as all in a day’s work. The little extra marathon training is just a bonus.

Until last February. This guy was shot in the leg. By one of those fleeing criminals. His wife got that scary phone call all police officer’s wives dread. His children had to learn at a very young age that daddy’s job is just that more dangerous than the rest. His parents had 15 years shaved off their lives instantly.

Sure, there were some moments. With surgery, medical delays, and lost training time, his dream of qualifying for the Boston Marathon this year was gone. It was disappointing. Many runners might have even written 2011 off as a non-marathon year.

So he started up again. Slowly at first. He carried a keychain his brother the Marine had given him for inspiration. He found his stride. He registered for the Chicago Marathon. But this time, he had a greater cause. He decided to run for the Chicago Police Memorial Foundation and raised close to $1,000 for families of the fallen. According to the website, the foundation supports the loved ones of officers killed both directly in the line of duty as well as those who succumb to the extreme psychological stressors and take their own lives.

Our guy completed the marathon in 3:36. He averaged slightly over an 8-minute mile, despite having to walk several times due to some cramping and muscle strain. His wife and I were able to spot him at the 13 mile marker, and my only regret is we didn’t get the biggest most obnoxious sign we could find.

I know this guy doesn’t run for accolades or awards. He doesn’t even seem to understand that running a marathon eight months after getting shot is kind of a big deal. His wife jokes that he’ll be donating a kidney by December just to round off his year. That’s just how he rolls.

Whenever I have a bad week or begin to question whether people are really capable of great things, I think of this guy. I think you should, too.

Whether you want to go back to work, go part-time or want more flexibility, now is the time to take advantage of the changing workforce.
Read more
Guides

Want to be the coolest parent out of all your child’s friends and throw the best birthday party? We’ve got you covered.
Read more
At Home