Kick off the holidays on the Magnificent Mile 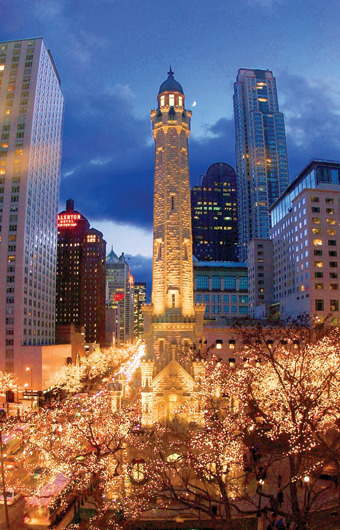 According to folklore, Chicago-or Michigan Avenue, to be exact-is where the tradition of putting twinkly white lights in trees began.

And each year, more than one million tiny lights are lit on the boulevard at the Magnificent Mile Lights Festival, the holiday season’s first celebration.

“We’re trying to get the word out to as many folks about the lights festival and certainly want everybody to have the best experience they possibly can,” says marketing co-chair Bob Dion.

He shared his insider secrets to make sure families kick off the holiday season right-and with a great view.

Festivities start at 11 a.m. at Pioneer Court (in front of Tribune Tower) with a concert by Justin Roberts and the Not Ready for Naptime Players.

“It’s wonderful for the stroller crowd, because it’s before things get crowded.”

After the concert, stick around for other kid-friendly acts, and check out all the free fun at Lights Festival Lane, including Eli’s Cheesecake, face painting and a visit with Santa Claus.

Later in the afternoon, the crowd grows, so Dion recommends heading out for lunch, shopping or a visit to the Hancock Observatory before staking out your turf for the Lighting Procession.

Latecomers gravitate toward the intersection of Wacker Drive and Michigan Avenue or the stretch of Michigan from Superior to Ohio Streets, Dion says, so he recommends families go to the east side of the street on the north end of the parade route to get a good view. His favorite spot for families is the intersection of Oak Street and Michigan Avenue, where kids can see Mickey Mouse leading the way.

Other highlights of the parade include marching bands, giant inflatable characters, Disney characters and stars, sports celebrities, and, of course, Santa. The parade is followed by fireworks about 15 or 20 minutes later.

If you want to sit in a less crowded area, but still want to see the fireworks, Dion recommends catching a cab down Columbus Drive and getting out near the NBC Tower.

“You’ll have a perfect angle for the fireworks,” he says.

What else to know

Although last year’s Magnificent Mile Lights Festival dawned warm and sunny, there’s no weather guarantee. So Dion recommends dressing warmly and bringing blankets and handwarmers, not to mention camping chairs so you don’t have to sit on the cold curb.

Hotel lobbies, stores, Starbucks and even Walgreens are all open, so you can duck in for a quick warm-up.

“It’s generally not bitter cold,” Dion says. “(But) sometimes a little chilly adds to the flavor of the season.”

Plan ahead! We've rounded up some of the best activities and events to do with kids in Chicago and suburbs this month.
Read more
Outdoors